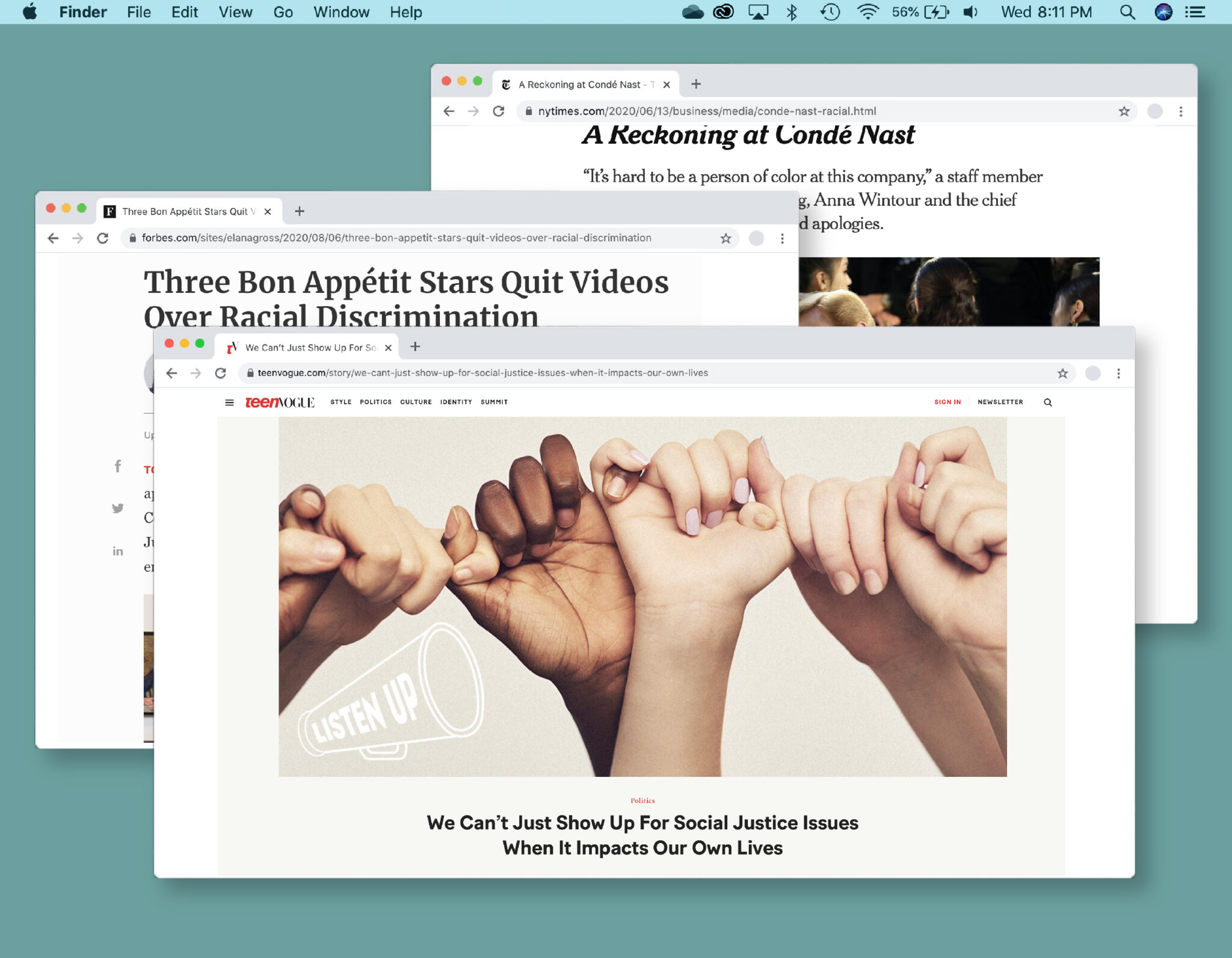 When talking about fashion journalism, most of us think of traditional printed fashion magazines. Fashion journalism itself dates back to the 18th century, in Cabinet des modes (1759), and has seen its format change many times over. From GQ’s glossy stacks to the blunt honesty of Man Repeller’s web page, fashion media has taken many forms. What we consider to be traditional fashion journalism is no more apparent than in the pages of Vogue under the faithful stewardship of Editor-in-Chief Anna Wintour. Despite the iconic nature of Vogue, the publication has been slow to rise to the call for progressive, socially innovative fashion and culture reporting. Their gap in content is more glaring when compared to its metaphorical kid sister, Teen Vogue.

It is a long-held sexist notion that women and girls are dichotomous entities. One such dichotomous belief is that we are either overly feminine, vanity-obsessed airheads or radical, sexless feminists that abhor aesthetics

It is a long-held sexist notion that women and girls are dichotomous entities. One such dichotomous belief is that we are either overly feminine, vanity-obsessed airheads or radical, sexless feminists that abhor aesthetics. It was when feminist fashion journalism began in earnest in 2008 at Jezebel that we began to see the intersection of traditional women’s media and progressive women’s media in the mainstream. Articles framed by the socio-political climate of the time, marked notably by Barack Obama’s first presidential campaign, appeared alongside fashion and celebrity news.

First published in 2003, Teen Vogue was like any magazine for young girls at the time, albeit with the added legitimacy of publisher Condé Nast. Fluffy pieces on fashion, beauty, and celebrity news were the total of the magazine’s contents. As a result, readership began to wane. It wasn’t until the 2016 U.S. presidential election that Teen Vogue took a page out of Jezebel’s handbook with the publication of Lauren Duca’s Op-Ed “Donald Trump Is Gaslighting America.” The virality of the piece put Teen Vogue on the political map, though it wasn’t the magazine’s first foray into the sphere of politics. What followed established their position as a fashion magazine for teenagers that can tackle anything from gun violence to skincare with equal aplomb and nuance.

When considering Teen Vogue’s shift and its resurrection from near obscurity, three names come to mind: Editor-in-Chief Elaine Welteroth, Creative Director Marie Suter, and Digital Editorial Director Phillip Picardi. It was the year after that Welteroth took on her role as the second youngest and first African American editor-in-chief in Conde Nast history, that Teen Vogue went exclusively digital due to budget constraints. As a result of incorporating political and socio-cultural content, dropping the print, and the leadership of Welteroth, Suter, and Picardi, Teen Vogue saw a steep and rapid increase in readership.

Among compliments for their journalistic integrity, political content, and diversity in models and contributors, a singular praise rises above the rest: Teen Vogue treats their young, mostly female audience, with respect – respect for their personhood, their intelligence, and their interests. Welteroth knew that women and girls are not dichotomous and can care about double-cleansing and immigration reform at the same time. Welteroth featured young feminist celebrities on her covers and had them contribute work of their own. She can be credited for recognizing the appetite of Gen Z for civic-minded, socially-just content that makes space for them in all their diversity. It wasn’t about a high fashion magazine preaching at young girls, but about inviting them into the conversation.

In October 2018, Lindsay Peoples Wagner took over as Editor-in-Chief and ushered in a new era for Teen Vogue. Where Welteroth pushed politics and a new form of journalism for teens, Peoples Wagner has focused on risk-taking and advocating. She gave Lil Nas X—a young, black, queer, genre-bending artist—his first major editorial on the music issue of that year. She featured Indya Moore in the Young Hollywood 2019 issue, who became the first trans non-binary person of colour to appear on the cover. Peoples Wagner doesn’t just give features to celebrities who aren’t getting features elsewhere; she also prioritized hiring disenfranchised folks, especially women of colour, for critical roles.

Despite the excitement for new-age fashion journalism from a mainstream publication, they have not gone without criticism. While the original political articles were met with a robust degree of skepticism, the more pressing criticism relates to the Teen Vogue Summit. The Summit, first held in 2017, is a conference for the magazine’s audience to promote activism, allyship, and personal and professional growth. With keynotes like Hillary Clinton and U.S. Rep. Maxine Waters, the summit actualizes the socially and politically aware foundation Welteroth began in 2016.

Teen Vogue’s target demographic is young girls, and their content is inclusion focused, but the tickets for their first summit started at $300 USD for the two-day event. The company offered 50 scholarships to attend the event for free, but many argued that such an event shouldn’t have such an egregious price tag at all. The concern is that Teen Vogue joins the ever-growing number of businesses who practice activism so long as it brings in revenue. Corporations are catching on that activism sells, and for a mainstream magazine that has been a leader in social justice content, it seems disingenuous for them to gatekeep the event.

Despite the extreme cost of the original event, each subsequent summit has changed its pay structure. In 2018, tickets were lowered to $200 USD to start. In 2019, Teen Vogue offered different packages, including day-passes, for as low as $29. For the now-postponed 2020 summit, ticket options were reduced to General Admission ($65 USD) and VIP ($150). Whether the changing cost is due to public pressure or a genuine adjustment to see what works best is unclear. The result is a slightly more accessible summit, now cheaper than other conferences young people might not have access to.

In the wake of the murder of George Floyd on May 15, 2020, widespread protests against racial injustice gave staff an opportunity to demand change from Condé Nast executives.

Finally, when discussing the trajectory of Teen Vogue and its innovative reporting, one cannot ignore that the magazine is a small part of a much broader ecosystem. Condé Nast is a global media company that, in addition to Vogue and Teen Vogue, publishes The New Yorker, Architectural Digest, Bon Appétit, Vanity Fair, and more. In the wake of the murder of George Floyd on May 15, 2020, widespread protests against racial injustice gave staff an opportunity to demand change from Condé Nast executives.

From the resignation of Bon Appétit Editor-in-Chief Adam Rapoport for brownface photos to the racial profiling of British Vogue Editor Edward Enninful at the London office, Condé Nast is experiencing an uprising. Five of ten hosts of the popular YouTube series Bon Appétit Test Kitchen have stepped down due to pay inequity and solidarity with their colleagues. Anna Wintour, the U.S. Artistic Director and Global Content Advisor in addition to her role as Editor-in-Chief of Vogue U.S., apologized to the staff at Vogue for not doing enough to support Black voices and acknowledged the mistakes the magazine has made under her leadership, for which she took “full responsibility.”

The executive leadership at the company has made the same general commitments to ‘doing better’ that most companies have been promising, including hiring a global chief inclusion officer and “providing an anonymous, third-party ethics hotline.” So far they have hired Agnes Chu, former VP of content at Disney+ to replace Oren Katzeff as president of Condé Nast Entertainment, and Sonia Chopra of Vox as executive editor at Bon Appétit.

So how does Teen Vogue measure up to the other brands under the Condé Nast umbrella? Or rather, how do the other brands measure up against Teen Vogue? Well, the key is that they are under the umbrella, and therefore subject to the same executive leadership that has openly admitted to mistakes thus far. Worth noting is Lindsay Peoples Wagner’s collaboration with public relations specialist Sandrine Charles to create the Black in Fashion Council to “represent & secure the advancement of Black individuals in fashion & beauty.” The BIFC launched on August 3, 2020, with 38 company partners, including Condé Nast itself, with the mission to release the results of their ongoing work in Fall 2021.

Teen Vogue continues to lead fashion media in creating inclusive, progressive, and innovative content that connects with its young audience at a deep level. As the ramifications of the Black Lives Matter movement permeates the industry, we must ask ourselves if fashion media as we know it can or should continue as it has. Change can feel incremental, but can we afford anything less than a broad restructuring of the fashion media landscape? The answer boils down to who gets the job. With Lindsay Peoples Wagner at the helm of Teen Vogue, Radhika Jones as editor-in-chief at Vanity Fair as of March 2018, and Samira Nasr as the newest editor-in-chief at Harper’s BAZAAR U.S. (and the first Black editor-in-chief in the publication’s 153-year run), women of colour are already moving the needle forward in fashion media at Condé Nast and beyond. We can only hope that the changes we’re seeing now are lasting, and as consumers, we can demand with our dollars and our clicks that the future brings about more.