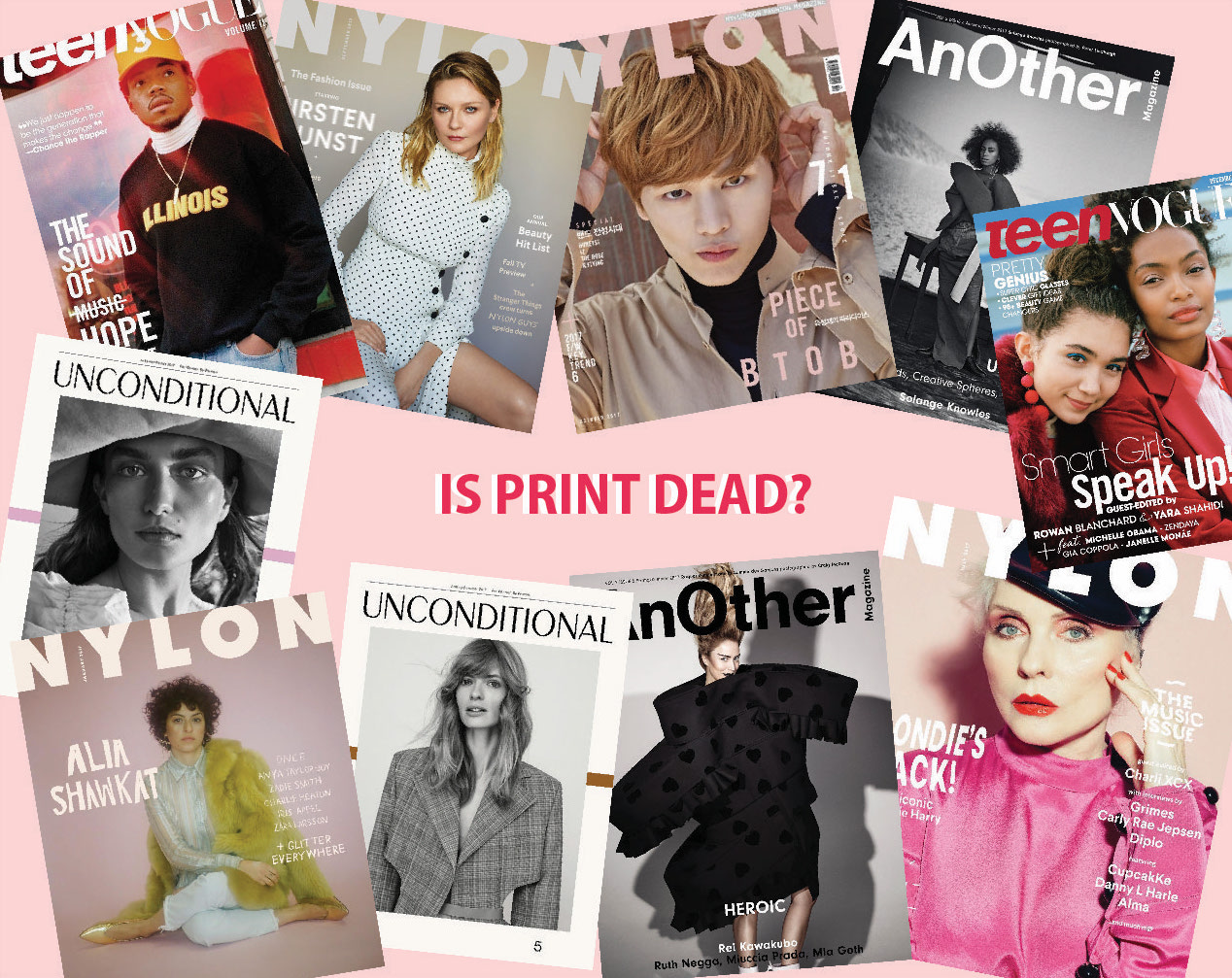 Print Is Apparently Dying, We Think It’s Not

Like many teenage girls, magazines were a big part of my life growing up. And they still are.

Flipping through glossy pages filled with articles ranging from ‘The Top 10 Summer Must-Haves Under $10’, to quizzes that would decipher ‘What Kind of Shopper Are You?’, was my biggest source of entertainment. As a fashion student, these publications still hold relevance in my daily life, as I am in constant search of inspiration as well as reprieve from stressful assignments. So imagine my reaction when I heard that my favourite publication as a 14-year-old, Teen Vogue, announced it was discontinuing its print platform. To say I was devastated was an understatement. The New York-based publishing company Condé Nast, parent to major publications like Vogue, Vanity Fair and GQ, announced major budget cuts, resulting in a 2.5 per cent decrease from its 3,000 employees, according to WWD.

Teen Vogue was just one of many publications affected.

Another One For The Book…Shredder

While it’s true that the publication’s print sales have fallen drastically in the last year, and their digital platform has grown in popularity, many others around the world were just as shocked as I was. It didn’t help that another favourite publication, NYLON, also announced the discontinuation of their print platform in what was considered a distasteful ‘shoutout’ post on Instagram. This was after it was revealed the magazine fired a third of its staff. NYLON’s news occurred mere weeks before the Teen Vogue announcement. To read more about how the loss of Teen Vogue has impacted our team, read this. So what do these closures mean for the future of print magazines? With budget cuts, discontinuation and reduction of print formats, is the print industry truly as dead as we feared? If you ask me, I’d say it’s only going up from here.

With the rise of smaller, more independent print magazines, such as The Gentlewoman, AnOther and Unconditional, it’s never been easier to find a niche and gain an audience through print. From Frankie, the bi-monthly Australian magazine founded in 2004, to Unconditional, the biannual New-York based publication founded in 2014, the quality of smaller magazines is high in writing and artistic direction. As production values get pushed up due to competition, in this market, smaller and fewer might be better. What these smaller publications also offer is aesthetic fodder for the Instagram generation, who have taken to not only reading print editions, but to sharing on social media that they are in fact reading.

These highly curated, photo heavy magazines are photography gold for those in need of some feed refreshing. Yet, nothing comes THAT easily: competition means more magazines will come and go, especially in the indie scene. On the bright side, it means standards will continue to rise, and who knows, maybe the mainstream titles in the print industry will look towards indie magazines for tips and tricks. Print is swiftly becoming an IRL representation of Herbert Spencer’s (yah not Darwin, who knew) ‘survival of the fittest’. We see nothing wrong with that.

As Print Comes and Goes, So Will Digital

Considering we live in such a globally connected age, it’s also no surprise that we’re starting to hear of indie magazines popping up in indie places like Sydney, Amsterdam and Barcelona; instead of the usual fashion epicentres of New York, London and Paris. While I’m sad to say goodbye to the two publications that shaped me into the individual I am today, the print industry is far from doomed. Print is able to do things digital can’t, and if people don’t realize that now, they soon will.

With our faces in phones and computer screens all day, more and more people will begin to crave the disconnected peace provided by flipping through actual pages. And too as our generation ages we will still crave and we will reminisce about the experience print provides, just as our grandparents prefer face-to-face meetings over text messaging. There’s something special about flipping through a tangible copy of your favourite magazine. There’s something even more special about having that keepsake for years to come. So, realistically, the print industry won’t truly ever go away. The way I see it, online media comes and goes. But print? Print is forever.