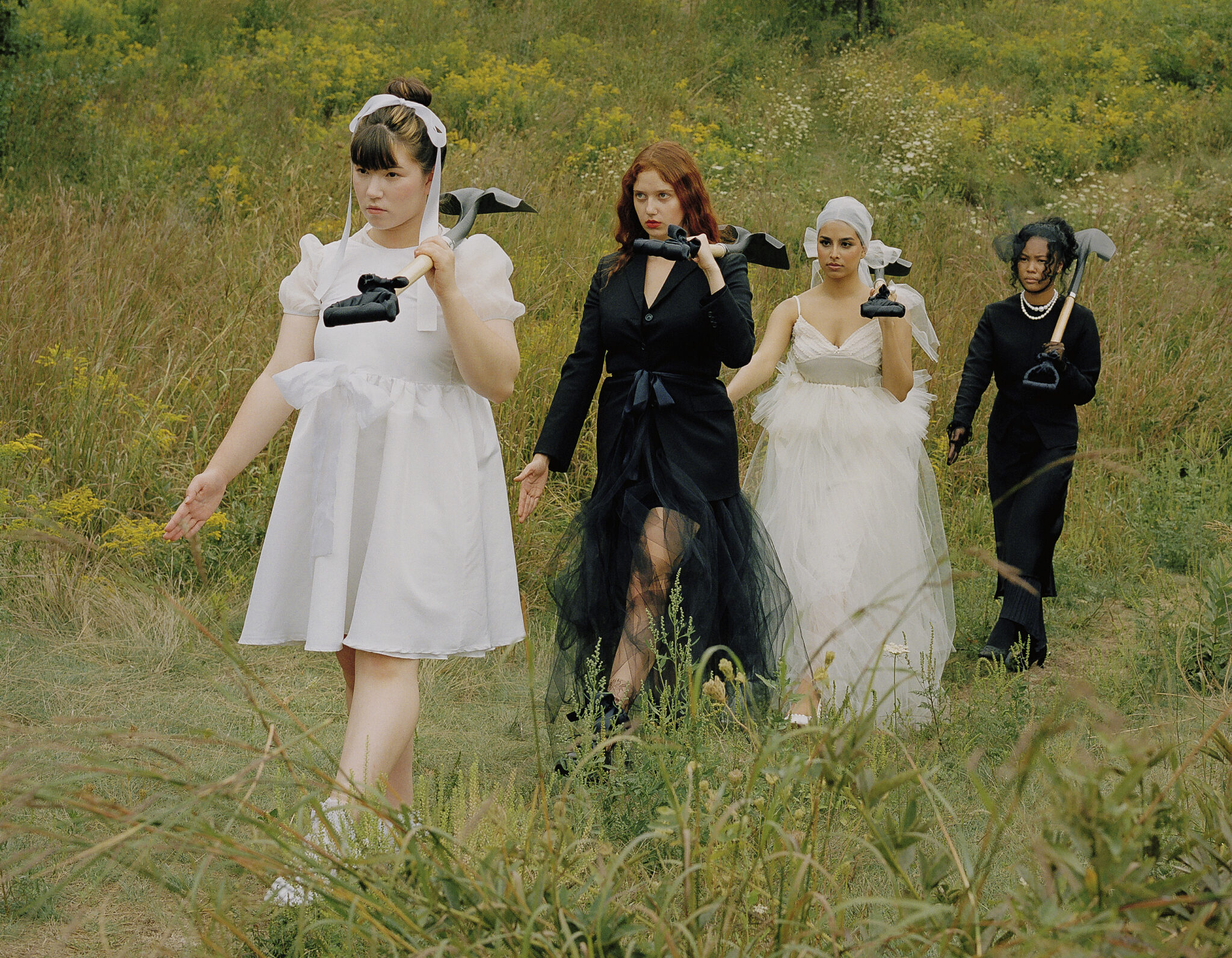 Living in the Middle

For many, navigating life as a biracial person can be quite jarring. We are quite literally being pushed and pulled between two directions by others who insist on defining us as one or the other. The easiest way for me personally is to define myself as someone who lives in the middle. I am both, I am mixed. I’m tired of feeling the need to prove myself to anyone who poses the inevitable question on everyone’s lips: “what are you?”. I’d like to just exist.

There are many aspects of being biracial that bring me joy. I feel proud to be the product of two individuals with different backgrounds. While I’ve always been proud of who I am and where I’ve come from, many of the struggles I’ve encountered have been a result of ignorance. As a young person, I was always receiving compliments, but not fully understanding why. It’s taken transitioning into adulthood that I’ve realized that mixed and biracial children have some sort of fanbase. I feel discomfort thinking of the fact that there are Instagram pages dedicated to children who look like me. It’s through this I’ve realized there’s a fine line between flattery and fetishization. 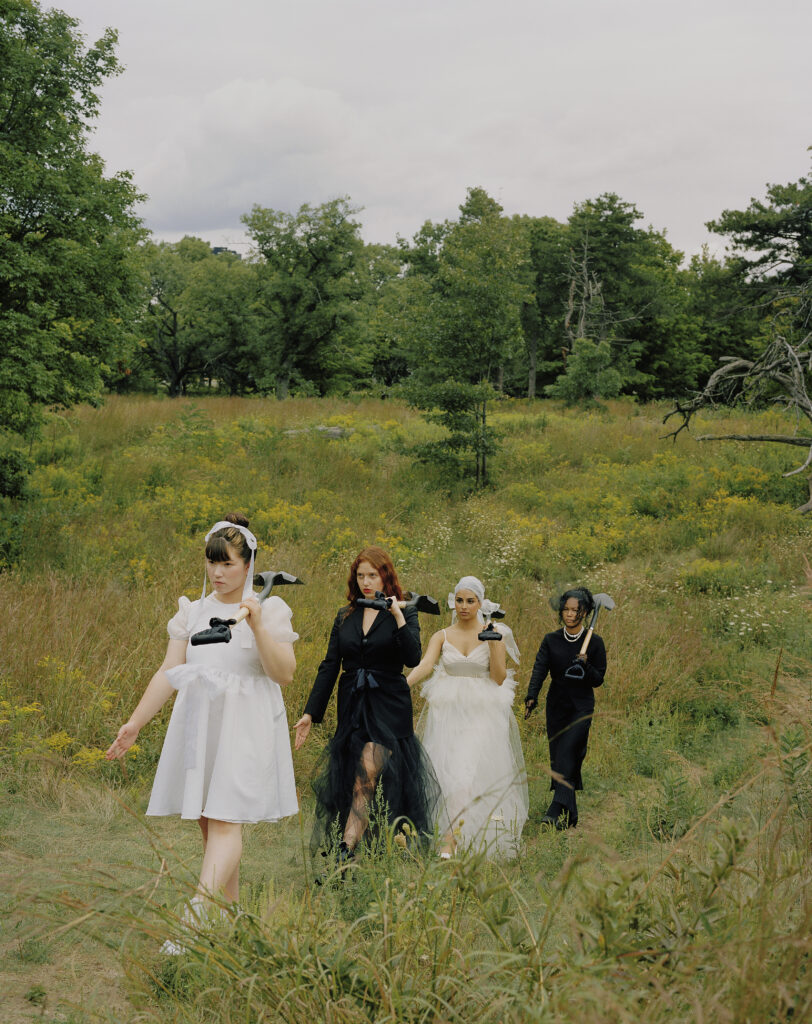 For me, one of the main difficulties I faced as I came to terms with my identity as a biracial woman was the struggle between expectations and preconceived notions harbored by those which surrounded me, with my actual realities. Growing up as a biracial woman, I could feel others categorizing me based on what they perceived of me, regardless if it was true or not. These surface-level assumptions of my character now serve as a reminder for me to never feel the need to be a certain version of myself to appeal to what others are already thinking. For many of the people I grew up with, I was one of the only representations of black people they had interacted with. For this reason, I was reluctantly given the role as the token black friend, or the approachable person of colour for educational purposes. I found myself bombarded with the opportunity to correct the offensive behaviour of others. While I now acknowledge that it was important for me to let it be known that saying the N word as a white person for example, is wrong on many levels, it’s taken me awhile to see that it’s not my job to educate others; I am not the spokesperson for all people of colour. An important lesson I’ve learned as a biracial woman is just because as a person I come off as approachable or easy to digest, doesn’t mean I should allow myself to be taken advantage of, or take on duties that exhaust me. 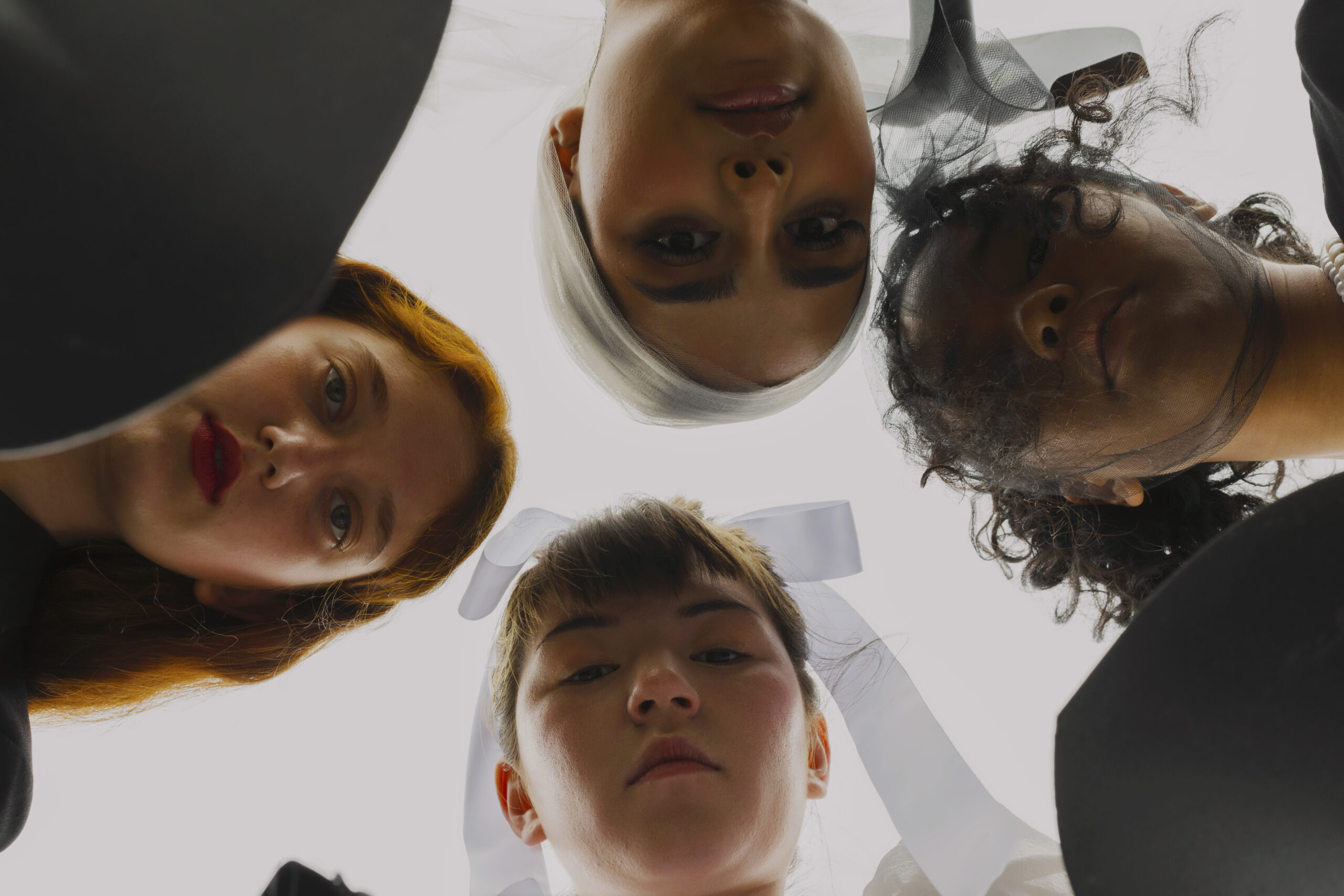 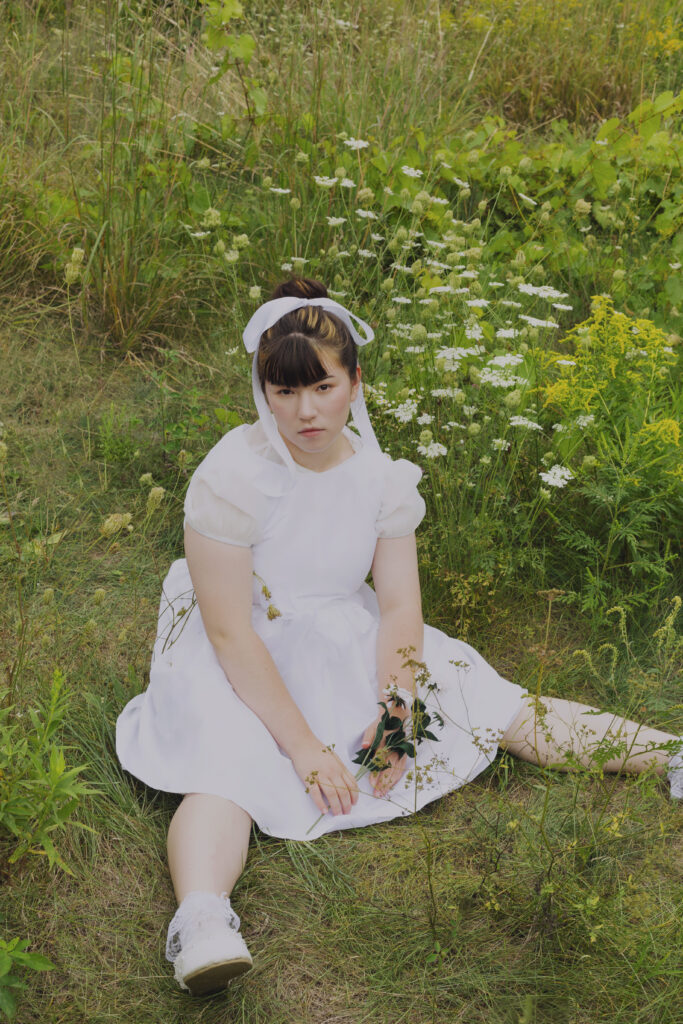 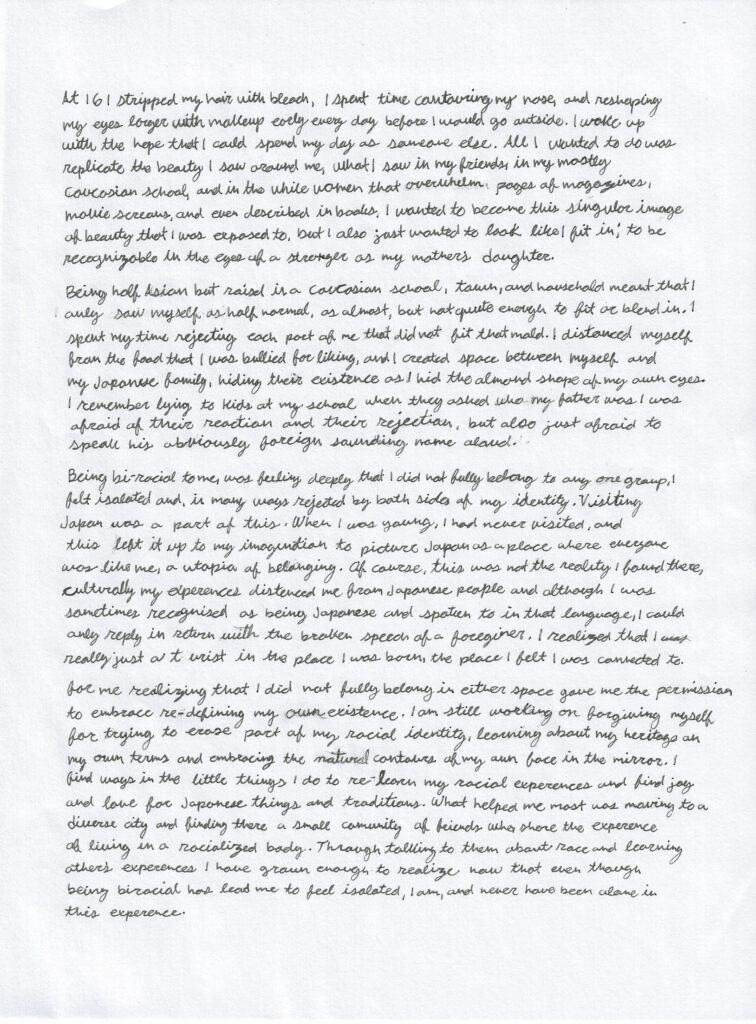 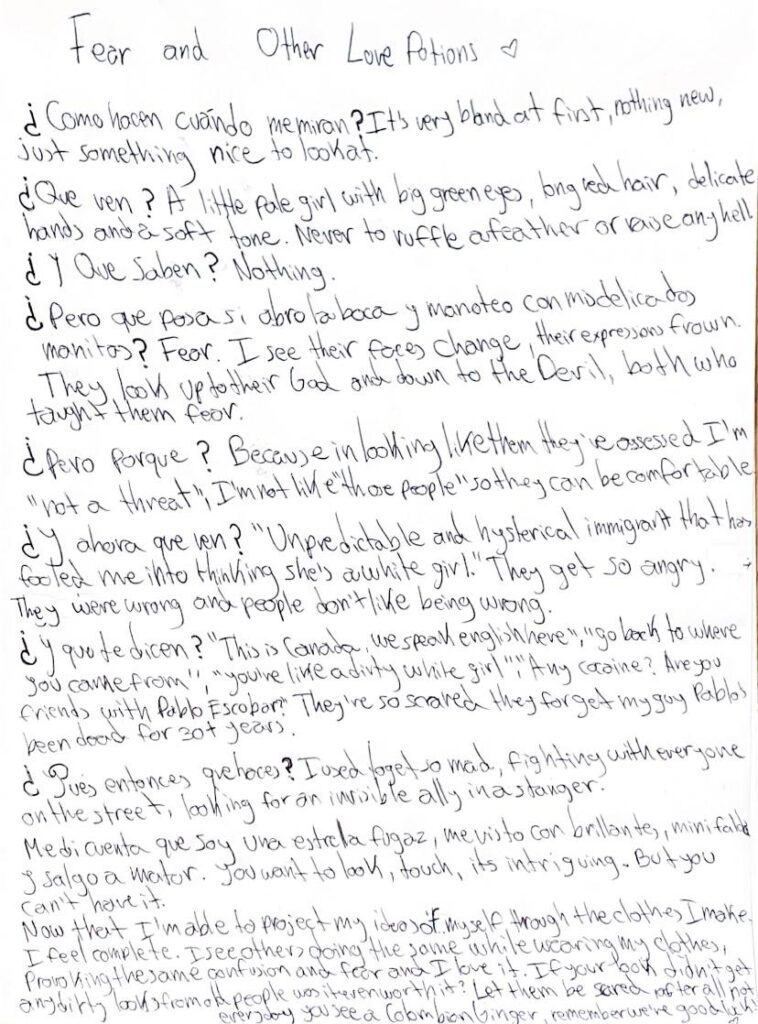 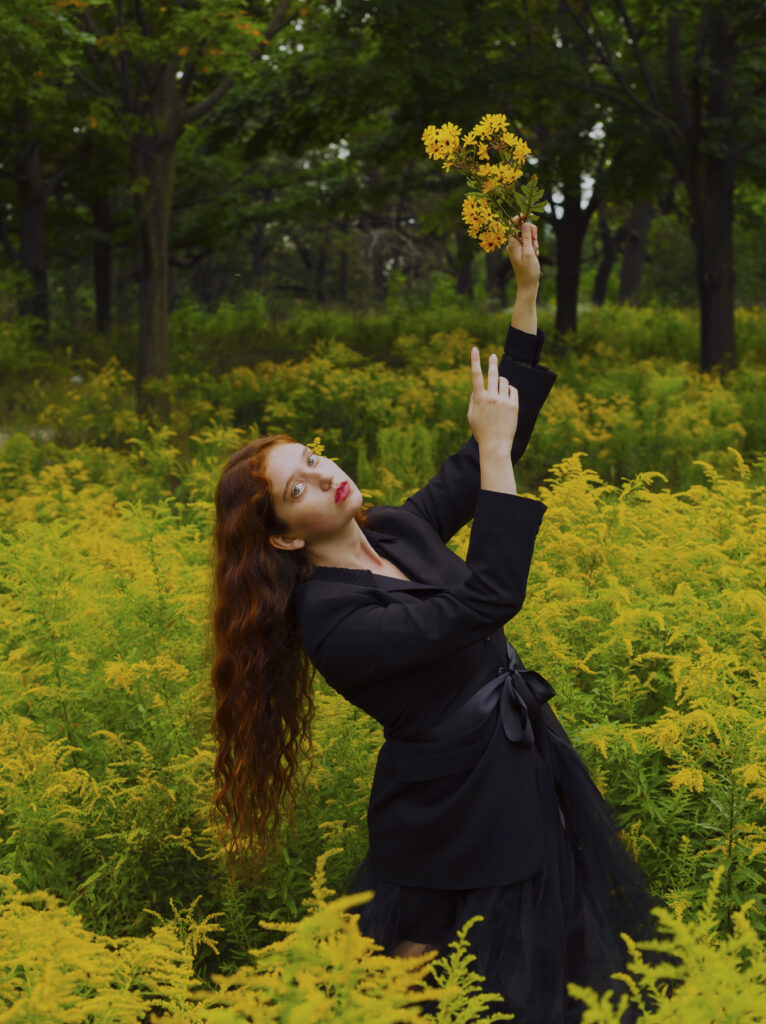 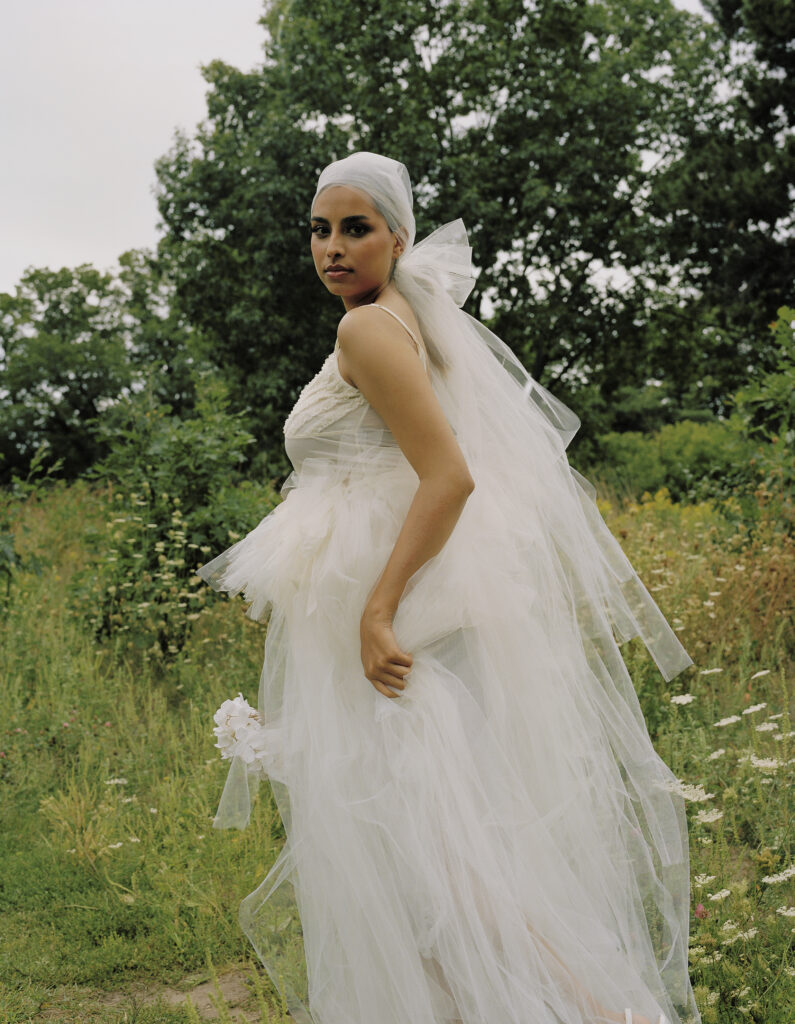 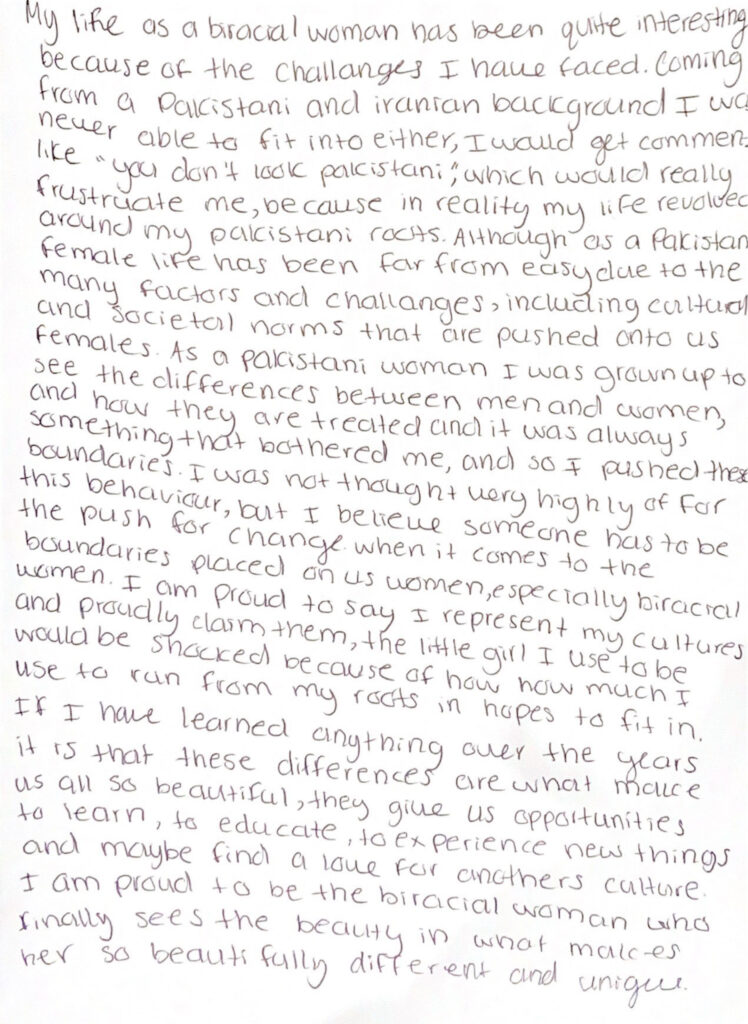 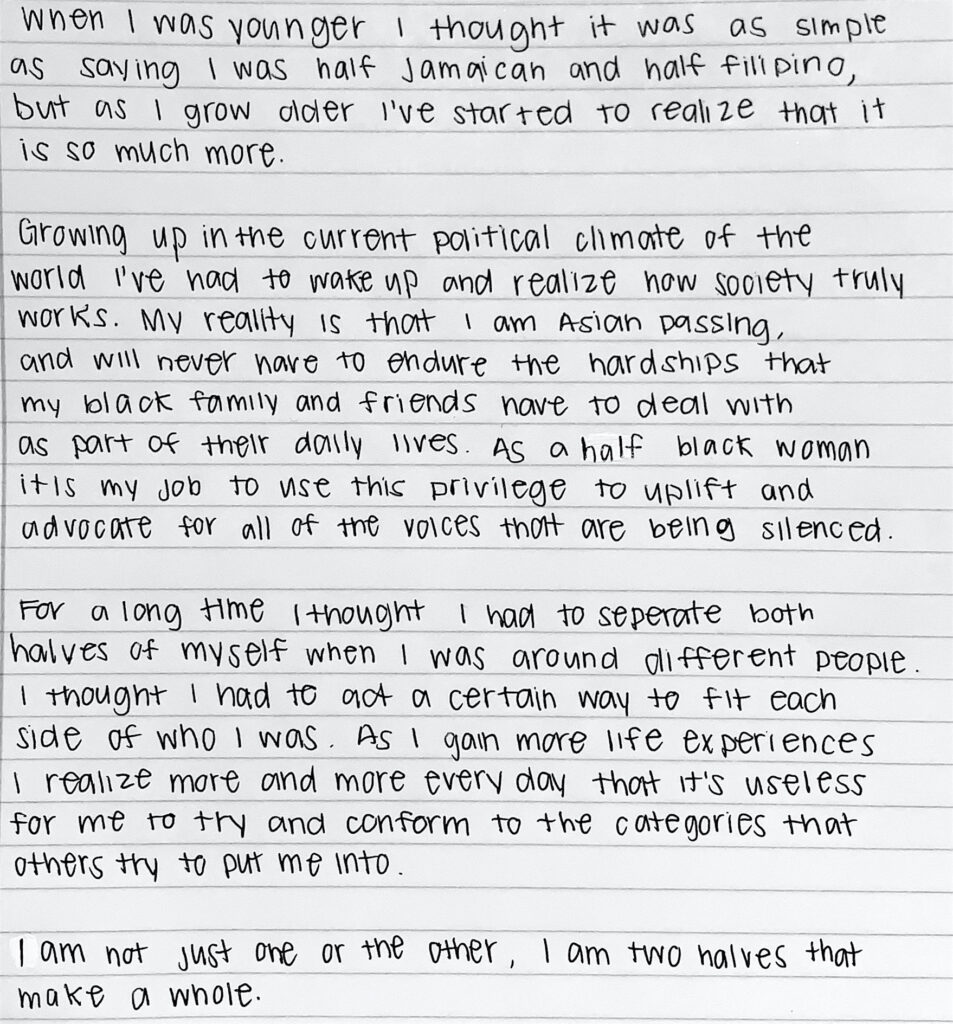 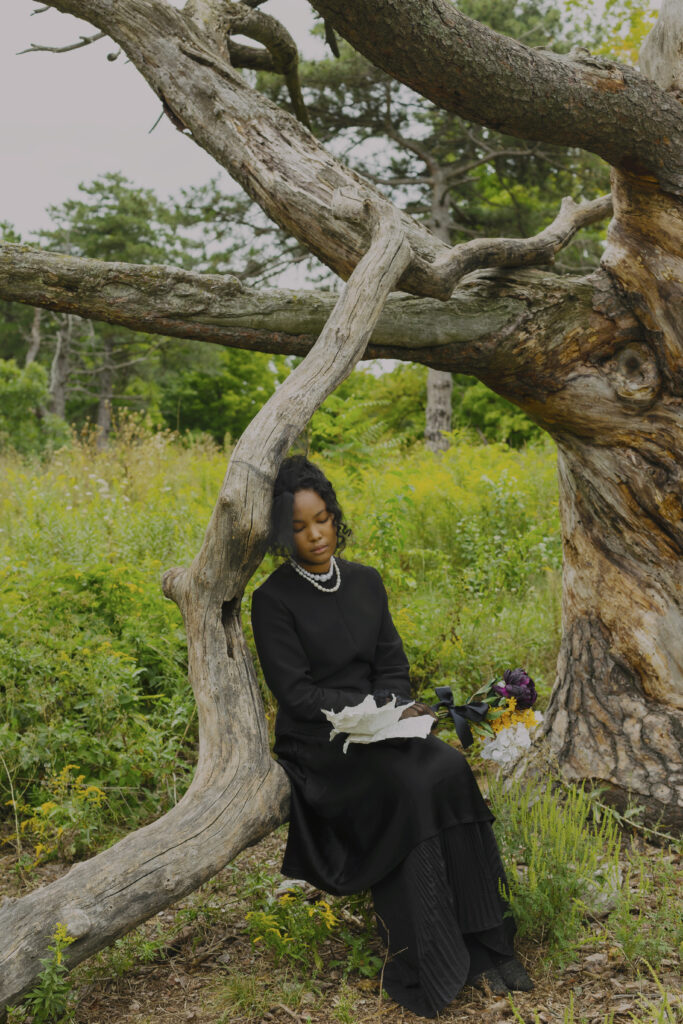 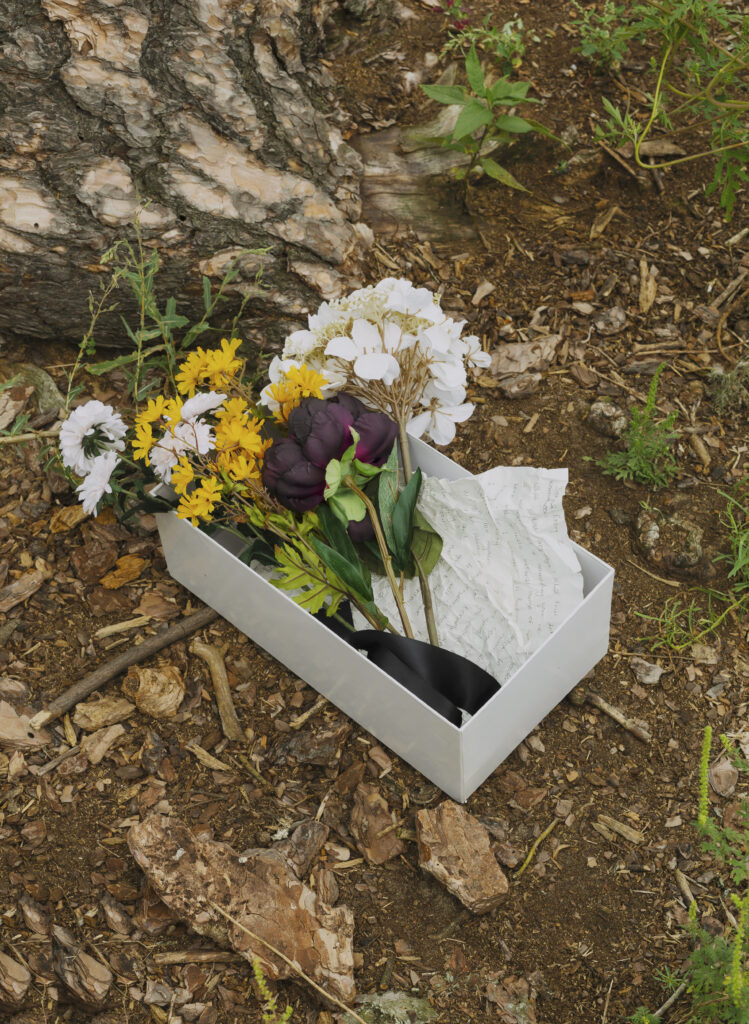 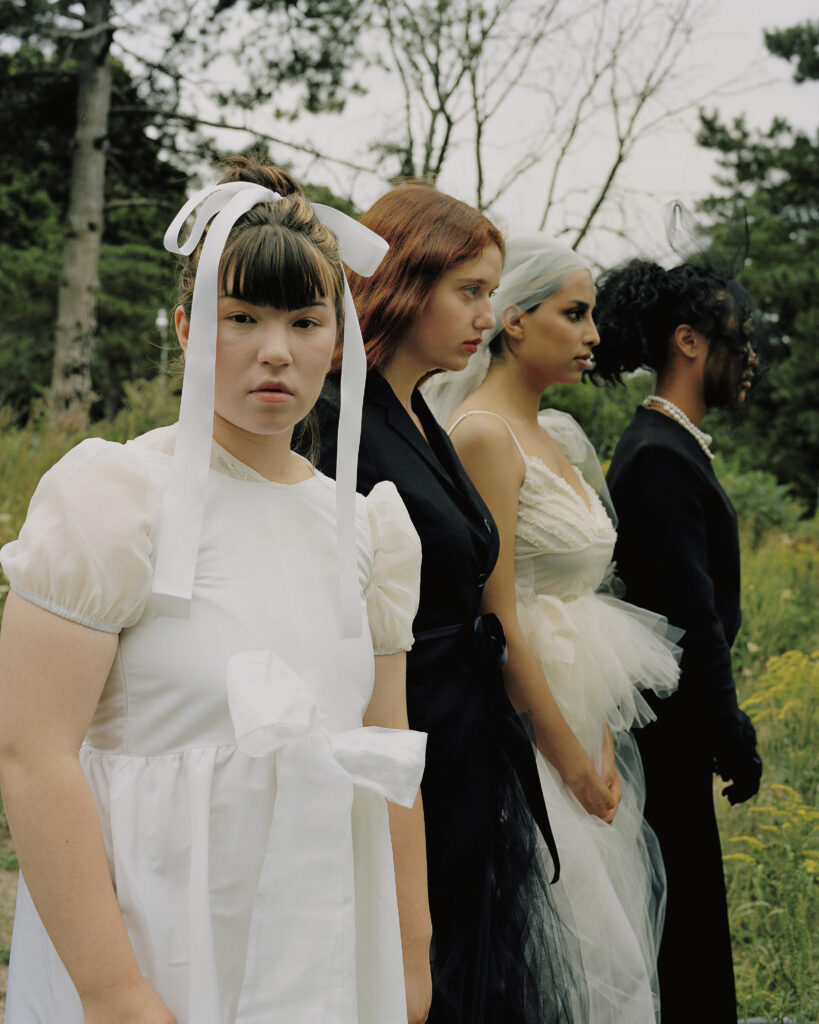 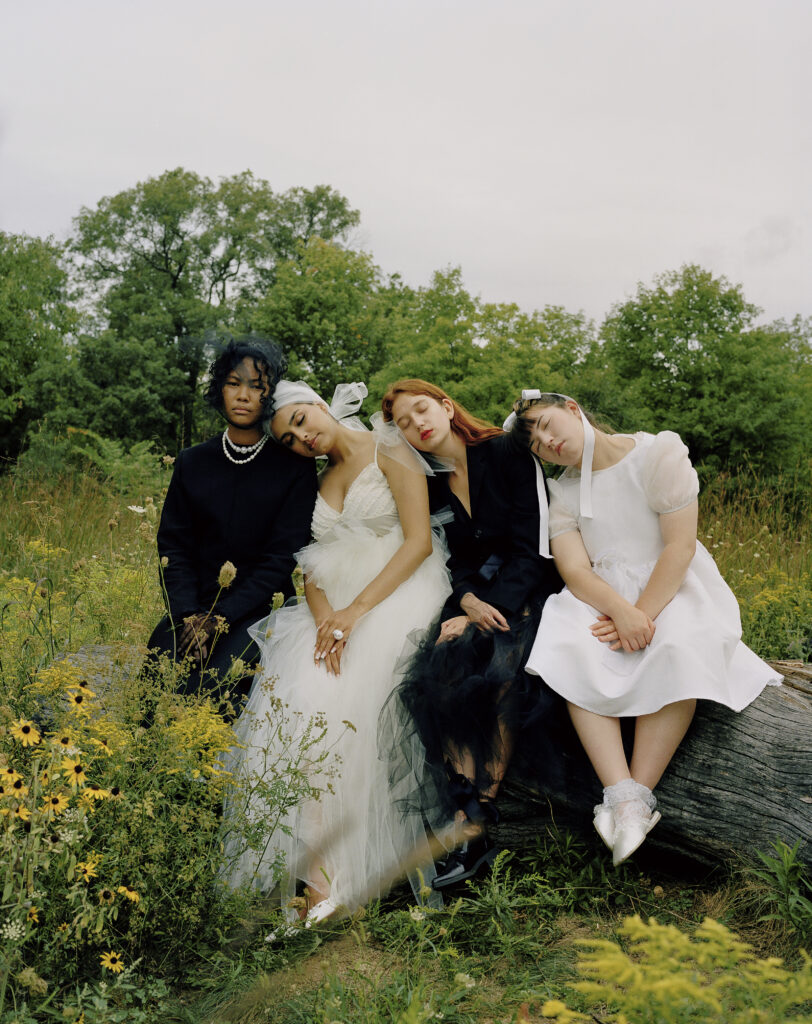 This, along with also being half white, led people to confront me with the idea that I’m the watered down version of the real thing. I constantly heard comments like “you’re not really black, you’re only half”, or “you’re an oreo” – the classic comment directed towards people of colour who are perceived to “act white”, whatever that means. As harmless as these comments may have been intended, all they did for me was instill a monumental anxiety that I’m somehow white washed, and that I should be ashamed, even though it’s inevitable I absorbed certain characteristics from my white mother, and went to schools where I was effectively surrounded by white people and their culture. While I know now that this is not true, for many years and still to this day I have people imply that I shouldn’t behave the way I do or enjoy the things I do. Even down to the music I listen to or the company I keep, and exclusively simply based on the fact that I’m a black woman. If these attributes did not align with assumption, I would be questioned, or become the subject of a little joke. I’ve realized that the way I’m perceived and interacted with is completely out of my control; moving forward out of my adolescence, I try to separate myself from those who don’t understand me, I try to separate myself from ignorance as much as possible. But that’s not always realistic.

It’s been difficult navigating young adulthood, grappling with these outside expectations of me; as a teenager I harboured a great amount of confusion and self doubt, worrying about what people thought of me. I think it’s important to accept the fact that we are constantly growing and learning about ourselves. There is no set criteria for how a biracial person should look or act. There’s no need to follow the steps of those who came before me, nor do I have anything to prove. I’ve definitely learned to allow myself to just be comfortable with who I am. In terms of feeling scrutinized, I’ve decided not to let things bother me as I know who I am, I’m proud of who I am, and nothing else matters.