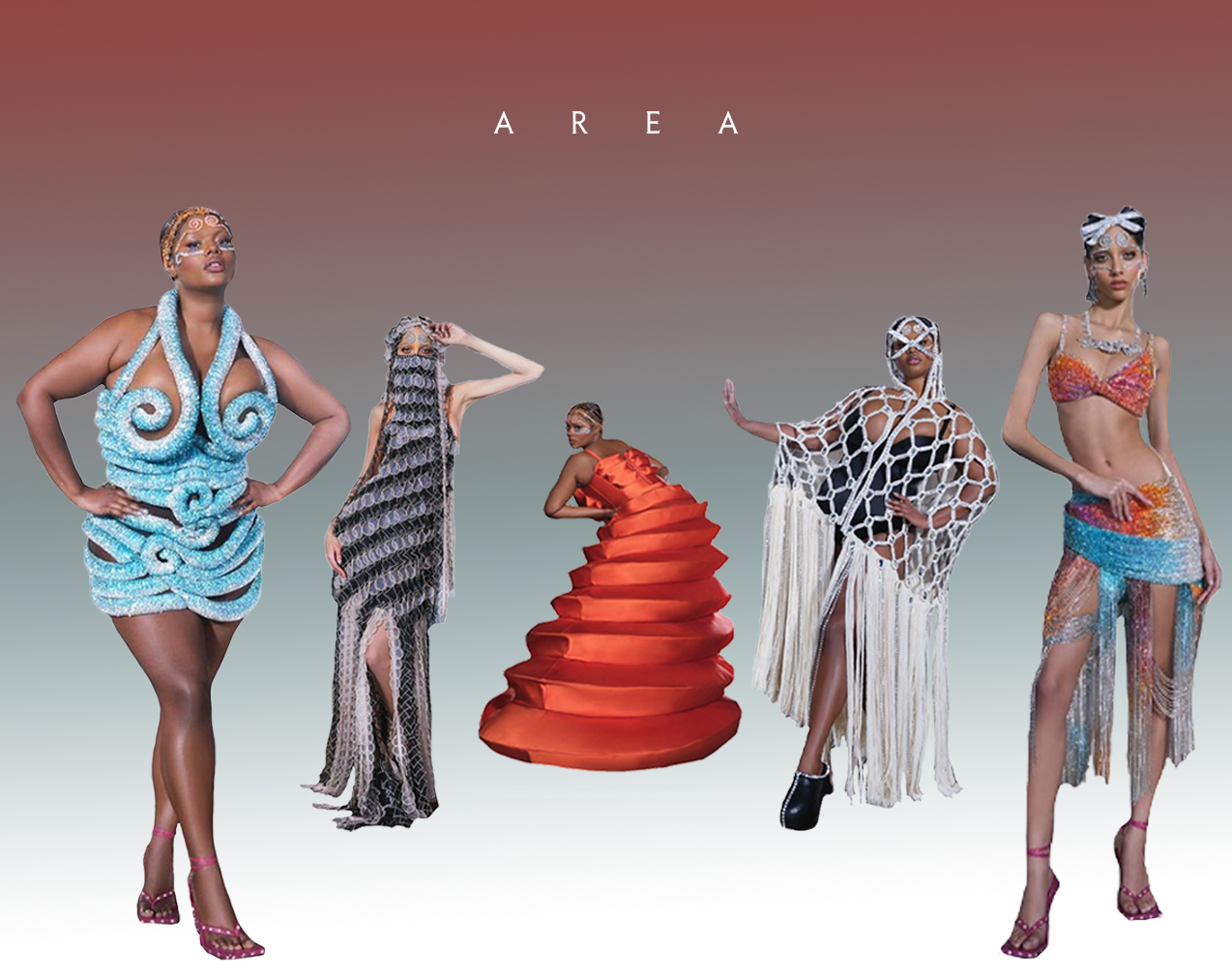 “An exclusionary club that still operates with archaic societal rules that prioritise specific cultural backgrounds over others,” this is how Dazed interprets haute couture and the FHCM (Fédération de la Haute Couture et de la Mode). This sector of the fashion industry has maintained its exclusive viewership—only rearing its head to those who approach it with open wallets and insider connections. While a sizable portion of fashion has undergone a process of democratization, haute couture has been left unscathed.

The pandemic has forced couture to democratize itself even further as designers present their collections online, but outside of this precaution, little has been done to modernize that portion of the industry. Unlike the current fashion system, which we see consistently critiqued, why has haute couture survived under such rigid rules?

In light of the recent Spring/Summer 2021 Couture week, Beckett Fogg and Piotrek Panszczyk’s NYC- label AREA closed with a collection that actively challenges both the social and physical constraints of couture. While the brand didn’t officially close the show according to the FHCM schedule, in 2021 is it really necessary for it to go through such an old- fashioned system?

The ready-to-wear brand decided to push their limits when they inserted themselves within haute couture week; after presenting their Swarovski clad AW20 ready-to-wear collection, AREA deconstructed their show stopping bustier which consisted of 84,400 crystals and 579 yards of chain. Perhaps to assert themselves within the couture industry, the video showcases just how much work went into the construction of that garment. The partners became aware of how far they could go with their craftsmanship, which in turn brought forward a collection that poses the question, can couture look like this?

Trying to crack into the haute couture sector with an inclusive lens, AREA dominates the runway with a diverse cast, modelling their collection on a variety of bodies. In an area of fashion that is often limited to change, AREA’s collections question what exactly makes haute couture, haute couture? Couture continues to showcase these collections on a sample size, binary body. Both Fogg and Piotrek want to change this aspect of couture, believing that no matter your size or stream of income, you can still obtain a beautiful, custom garment.

It becomes equally important to question what remains when this exclusivity is removed from haute couture. What happens when we make haute couture a little more accessible? Howeveryou define haute couture, what it socially represents is only accessible to 0.001% of the population, according to British Vogue.

Opening up this level of craftsmanship and fantasy to a larger audience allows for the possibility of haute couture getting into the hands of new groups. With a collection that actively challenges the constraints of haute couture, AREA doesn’t believe in hiding this level of craft. “There’s not going to some secret phone number you have to know to be able to get an appointment” Beckett states, “that’s not how it should work.”

Perhaps the secrecy of haute couture is what makes it feel so magical. However, in a time where transparency is something of value to the general population the idea of couture becomes even more distant. For many, obtaining a piece of couture has always been unattainable. Creating a more accessible form of haute couture is further defining what it even means.

Once a form of elitism, the practice can be translated into an art form that has the potential to be enjoyed by varied audiences, while still showcasing the work and craftsmanship that goes into each of pieces.

While the exclusivity of haute couture has been thriving since its official creation in 1868, AREA has pulled back the curtains and allowed us to picture haute couture without all of the inaccessible demands. The future seems bright not only for AREA, but for haute couture in general.

With other couture brands hopefully jumping on the bandwagon, we could see the industry expanding into an even larger market, including a wider range of gender identities, races, and sizes. The ‘new couture’ can become a space that values inclusivity, opening the door to the beauty and craft of couture.