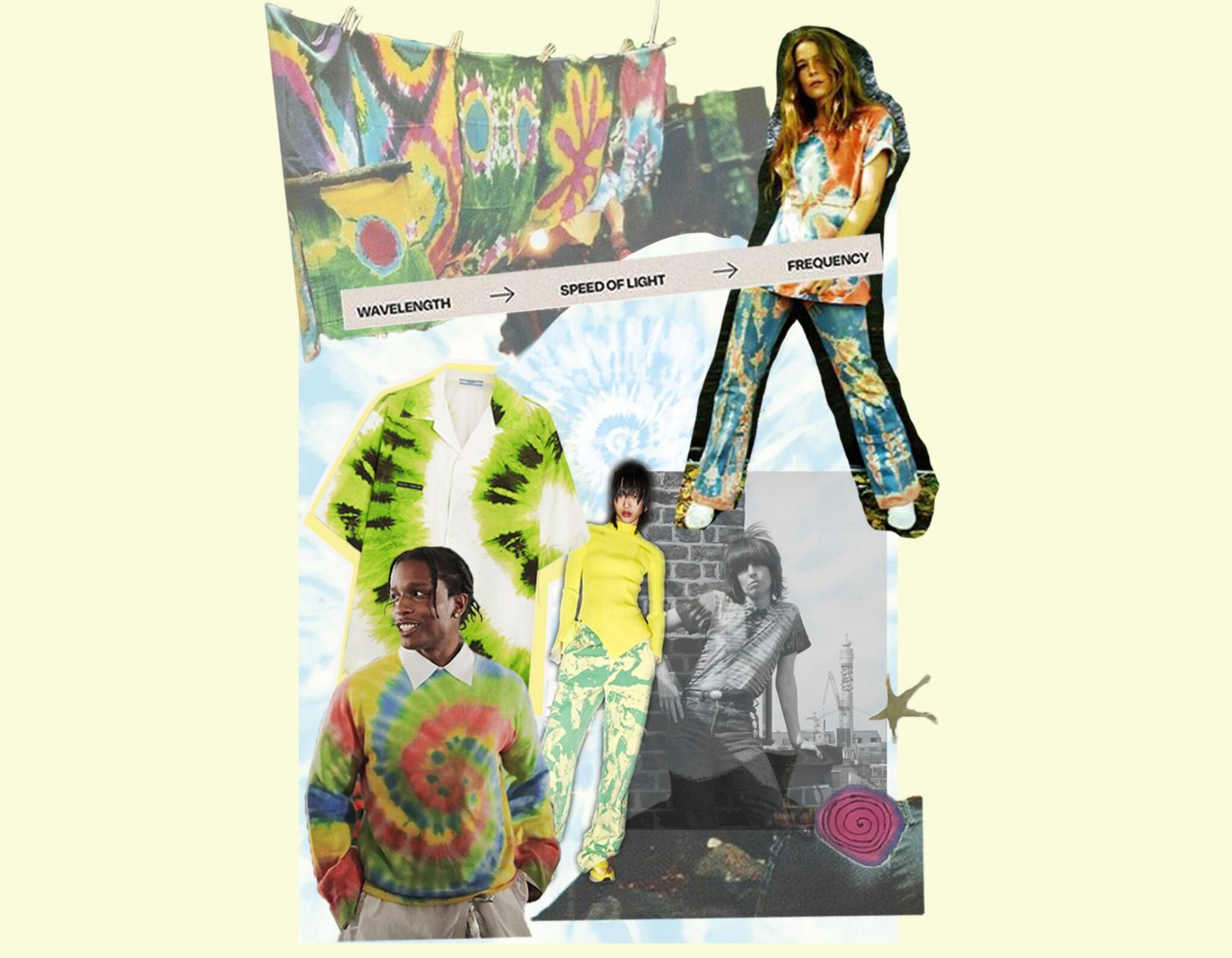 To Tie Dye or Not to Tie Dye

From t-shirts, to tote bags, to even tuxedos, tie-dying has risen from an obsolete past to find itself sweeping the runway. While the act of tie-dying has existed for centuries, its initial stylistic popularity first became a sensation in the 1960’s, more specifically when infamous musicians like Janis Joplin, Joe Cocker and Stevie Nicks wore tie-dye while performing on stage at the Woodstock festival. Since the festival, tie-dye has become a motif associated with the 60’s, when peace, love, music, drugs and compassion were reflected through the psychedelic pattern. However, as we see more and more brands release tie-dye products to the market it makes us wonder: Why has tie-dye once again become popular?

Like all trends, tie-dying has several different factors that have led to its success in these past few years. From the churning political climate, to the style stealing of celebrities and the nostalgic urge to reminisce, tie-dye has continued to act as a resurgent force.

As many of today’s high-fashion creative directors grew up during the 60’s, it’s no surprise that tie-dye has found its way onto the runways. Between 2018 and 2020 fashion brands including Prada, Loewe, MSGM, Dior, Versace, R13 and Tom Ford have all found solace in the deeper message reflected in tie-dye, a message that initially spoke of peace, solidarity, and expression. This political landscape is similarly reflected in the recent political climate as we fight much of the same battles that were fought in the 60’s, involving civil, LGBTQ+ and political rights.

Tie-dye had once acted as a silent protester to bring peace and expression amongst societal normalities of nuclear families and uniformity; today, tie-dye is representing those same motives while incenting vibrant colour to peacefully fight political darkness. Even Chris Leba, the creative director for R13 stated in an interview with Harper’s Bazaar,

“In the Trump era when right-wing politics is so loud, I think tie-dye can be viewed as a peaceful, but defiant protest against conservatives.”

As the defiant tie-dye messages made its way from the runway to the streets, celebrities created an even further landscape for the trend. From A$AP Rocky at Paris fashion week, to Jonah Hill drinking iced coffee, to Justin Bieber attending church, celebrities in tune with the world of street style have embraced tie-dye for all circumstances. Even the 90’s had a period of tie-dye revival, when celebrities like Rhianna, Drew Barrymore and Beyonce embraced an age of fashion freedom and dressed in colourful, carefree tie-dye tees while walking the red carpets; this further influenced the public and increased the value of tie-dye within affluent street culture.

While the public has a habit of copying celebrity style, the current generation has also proven their loyalty to past iconic celebrities through the unity of television and music. As trends recycle themselves, the 2010’s have proven itself as an era of fashion resurgence, where obsolescent trends like mom jeans, scrunchies, crop tops, and neon bodysuits have been resurrected from their graves by the millennial generation. This constant fight for vintage nostalgia eventually created stores like Anthropologie, Free People, and Urban Outfitters where eclectic bohemian tastes outside of updated generational trends flourished with cheap products and high prices. Where of course, tie-dye eventually found a home after a life on the runways.

Before tie-dye flaunted the runway and found its way into malls it first grew from an ambiguous history with origins ranging between Japan, India and Africa. In India, there’s an ancient dyeing practice called Bandhani where you tie pieces of fabric in special patterns before being dyed; this has been used since the sixth century. In the eighth century, a similar practice called Shibori, in which you shape fabric before you dye them, became a popular resist dyeing method in Japan. Resist dying is also used In Africa where indigo dying on textiles has been used since the eleventh century and can be referred to as Adire.

From the churning political climate, to the style stealing of celebrities and the nostalgic urge to reminisce, tie-dye has continued to act as a resurgent force.

With its vibrant colours, unpredictable patterns and unanimous message of peace, tie-dye has always been much more than a costume for hippies. No matter how many generations tie-dye fashion will filter through, at the end of the day, this colourful style will forever remain a symbol of peaceful expression.