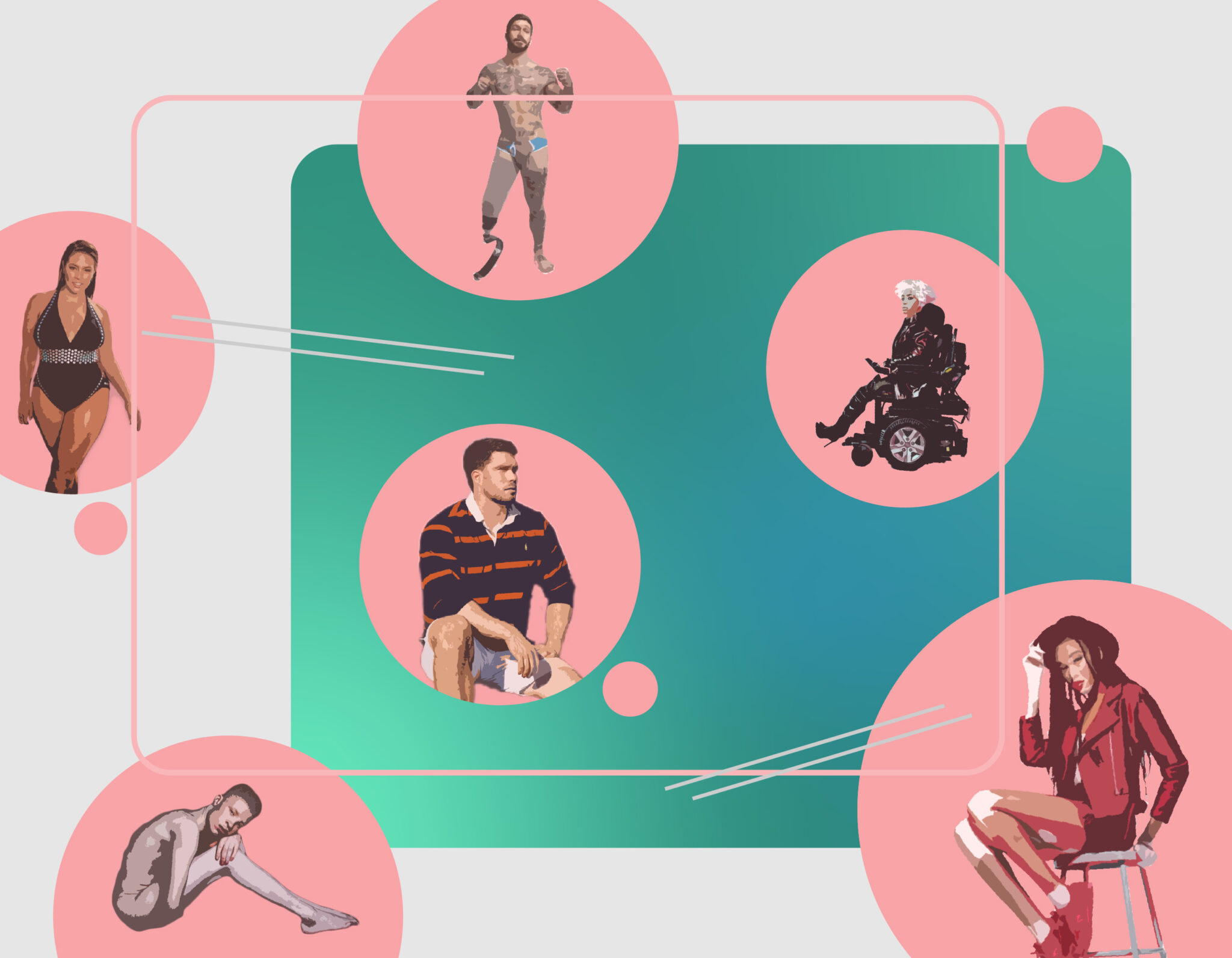 Notoriously slow to change, the fashion industry has long preferred a very specific type of person to embody ideas of beauty. As consumers and insiders push for inclusivity, these six models have proven that you don’t need to be white, blonde, and thin to sell the fantasy.
Share on facebook
Share on twitter
Share on pinterest
Share on linkedin

I’m fascinated by how effortlessly fashion model standards splay themselves across my vision numerous times throughout my day, whether through my social media feed, electronic billboard advertisements, or magazine covers as I pay for my groceries. The underlying weight of these social norms had a more significant impact on how I viewed my beauty, especially through those awkward adolescent years. My self-esteem was sunken due to comparisons I would find myself making between myself and stranger models. An unwanted bias was curved onto the lining of my brain that only physical beauty matters.

Today I want there to be questions placed into the wider modeling world.

The fashion modeling world is making the turn into a more expansive place where fashion collides with every day different body types. However, it is moving much too slow, considering it’s a 2020 world. Yet, steps are being taken by beauty agencies, designers, and brands to demonstrate that all beauty deserves to be displayed. Explore six different models who are making significant positive developments for the world of fashion modeling!

Steps are being taken by beauty agencies, designers, and brands to demonstrate that all beauty deserves to be displayed

Ashley Graham refers to her size as ‘My Size,’ as opposed to ‘Plus Sized’ because she believes it is essential to get away from unsaid statements that come along with a plus-sized status such as, ‘you don’t eat well’ or ‘you don’t work out.’

She gained major publicity for being the first size 16 model featured on the cover of Sports Illustrated Swimsuit Edition. She began modeling as part of the controversial 2010 Lane Bryant television ad called ‘This Body,’ in which female curves are powerful and sexy, rather than shameful.

Her Instagram followers have praised her for openly showing her cellulite on her account, which inspires them to take ownership of their bodies.

Check out her 2017 book, A New Model: What Confidence, Beauty, and Power Really Look Like, in which she gave insight as an advocate for body positivity!

Zach Miko never imagined that he would be considered a Brawn model, a plus-sized male model; to him, it was in the same realm of pitching for the Yankees. Yet, he is the most successful at IMG Models’ when they opened the new Brawn model division, which is dedicated to funding plus-sized male models. Initially, when companies booked Miko for photoshoots, hairstylists, and makeup artists were not used to working with a six-foot, six 290 lb man, having to use ladders and crates to reach him.

Miko has stated to have previously hated his body, due to struggling to slim his body with strict diets. Ironically, he now is in a position where, if he lost 50lbs suddenly, he would be without clients and his six-figure salary.

In response to Brawn models gaining popularity, beauty brands have needed to adapt, such as expanding their shirt sizes at fashion shoots since Miko’s shirts have required to be sliced in the back so he can fit inside in the past. Luxury brands are yet to be using Brawn models, but IMG Model’s has seven today due to increased popularity for realistically sized men.

At this rate, it is only a matter of time when plus-sized models will be in high demand at each modeling agency!

Winnie Harlow (Chanelle Brown-Young) – Proving Why There Needs To Be A Barbie with Vitiligo.

Winnie Harlow is a Toronto native model with the autoimmune disease Vitiligo that sees the body attack it’s own skin pigment cells. Her dark skin is covered in white patches, and she has suffered names such as ‘zebra’ and ‘cow’ in response to her physical appearance.

Tyra Banks states that on America’s Next Top Model, the judges are “not looking for duplications…they wanted originality’. This is why it was the perfect show that gave Winnie her start into the modeling world since her medical condition made her appear so different from the typical modeling norm.

Winnie has gone on to walk in the Victoria Secret Fashion Show, has appeared in Vogue magazine editorials, and has collaborated with Beyonce while creating the music video for track Freedom for her album Lemonade.

Myle Sexton, a famous Toronto jewelry designer, states that having Winnie “on magazine covers opens society’s eyes to the diversity in the world and promotes the fact that there is more than stereotypical beauty.” Although flattered and wanting their more representation for unseen models, Winnie is also committed to making sure her skin doesn’t define her. She arguably states, “my modeling career is about hard work…pushing boundaries will get you exactly where you need to be”.

Winnie is an excellent example of the right direction the modeling industry needs to head towards, primarily because she doesn’t rely on looking different but works extremely hard to remain relevant and thriving.

Alex Minsky turned towards physical fitness after his brother died from a drug overdose, and was approached by fashion photographer, Tom Cullis, during one of his routines. He had lost part of his lower left leg in Afghanistan when a truck ran over an explosive. He spent 17 months in the hospital recovering, 47 of those spent in a coma due to an acute brain injury, and then struggled as a result with PTSD and alcoholism.

This photoshoot with Cullis leads to more provocative shoots and viral online fame. His nearly nude photograph (taken by Los Angeles-based photographer Michael Stokes), had to be removed due to violating Facebook’s nudity rules. Alex notably became a sensation in the pop culture realm as one of the faces in the promotional poster campaign for the Hunger Games sequel Mockingjay Part 1, which highlighted the power of propaganda within the plotline.

Alex has been mistaken for gay multiple times (when he was first approached to model he thought he was being approached about his sexuality). LGBTQ+ aligned publications perhaps encouraged this image since Minsky has been posed in a skimpy rhinestone skirt with a Daisy Buchanan headpiece. Readers went wild. When asked about how he feels about the attention he receives from fans due to being viewed as a sex object (one even commented “I would suck his stump”), he replied,

“Maybe I just like being naked, ever think of that?”

Jillian Mercado is a Latina woman living with a disability who is inspiring other likewise individuals to see a place for themselves in the fashion industry by following her career example. She is in a wheelchair (due to muscular dystrophy), and has always been fascinated in fashion growing up, her mother stating that she was her only daughter who preferred to watch her sew rather than watch cartoons. Yet Jillian noticed a lack of models with disabilities in the media: “I used to look through magazines and notice that no one was in a wheelchair, and then Google searching wheelchair model and having zero hits.” So Jillian became a graduate of the Fashion Institute of Technology and took on a year internship at Allure magazine before starting in modeling campaigns.

Jillian’s first experience modeling was for designer Diesel’s ‘We Are Connected’ campaign. This opportunity gave her international recognition, a huge fan following, and was signed a modeling contract by IMG Modelling. This New York-headquartered company has represented many other Hollywood A-listers, such as Hailey Beiber, Gigi Hadid, and Halima Aden.

Jillian considers her image being blown up on a billboard in Times Square as one of her biggest modeling accomplishments along with being a part of major modeling campaigns for major organizations, such as Nordstrom, Target, and Olay. She was the first person living with a disability to be a cover star on Teen Vogue’s digital 2018 September issue.

One of the most inspiring qualities of Jillian is that she is not afraid to be outspoken about her beauty despite physical setbacks and actively focuses on being an activate to closing the barriers separating gender and disability from achieving one’s goals. She has gone a step further from inspiring others to make a difference. Still, she has made major steps to improve these social issues, such as through her publicized conversation with UN Secretary-General António Guterres exploring solutions to reduce inequality. Jillian is undoubtedly a model who sets a new definition of what models can achieve, in and out of the fashion industry, and that no disability should hold you back from achieving your dreams.

Shaun Ross – A Student To Unique Model To Singer

Shaun Ross is the first international male fashion model with Albinism, a condition in which people are born without the natural pigment (colour) in their bodies, which often leads to pale eyes, hair, and skin. In his schoolyard days, he was nicknamed with many derogatory names such as, ‘powder’ ‘white-out’ and ‘Casper.’ Despite the bullying Shaun faced, he describes his look as ‘euphoric’ and ‘edgy’, and clearly, his look has gained mass popularity of love for his confidence, rather than a disagreement with the way he looks.

Shaun transitioned into fashion after dancing for five years with the Alvin Ailey American Theatre Company (although he still actively participates in the underground ballroom scene). Initially, he faced criticism for not appearing ‘consumer’ enough to represent the everyday person walking down the street. However, his ability to pretty much pull off any outfit (with his signature blonde flat top haircut) has made him a popular choice to model high-end brands, such as Givenchy and Alexander McQueen. Although Shaun has never believed that he is utterly different from other models,

“I just give photographers a new challenge.”

Shaun has defined his career by appearing in many music videos, most famously in a lead role in Lana Del Ray’s hit Tropico. Shaun himself now has many musical singles after being encouraged by musical friends, such as will.i.am, his debut song Symmetry featuring Lizzo gives a personal look into the way he views the colour of his skin. His pivot into music reinforces the possibilities that can come from putting yourself into the public eye, despite what names you have been called in the past.