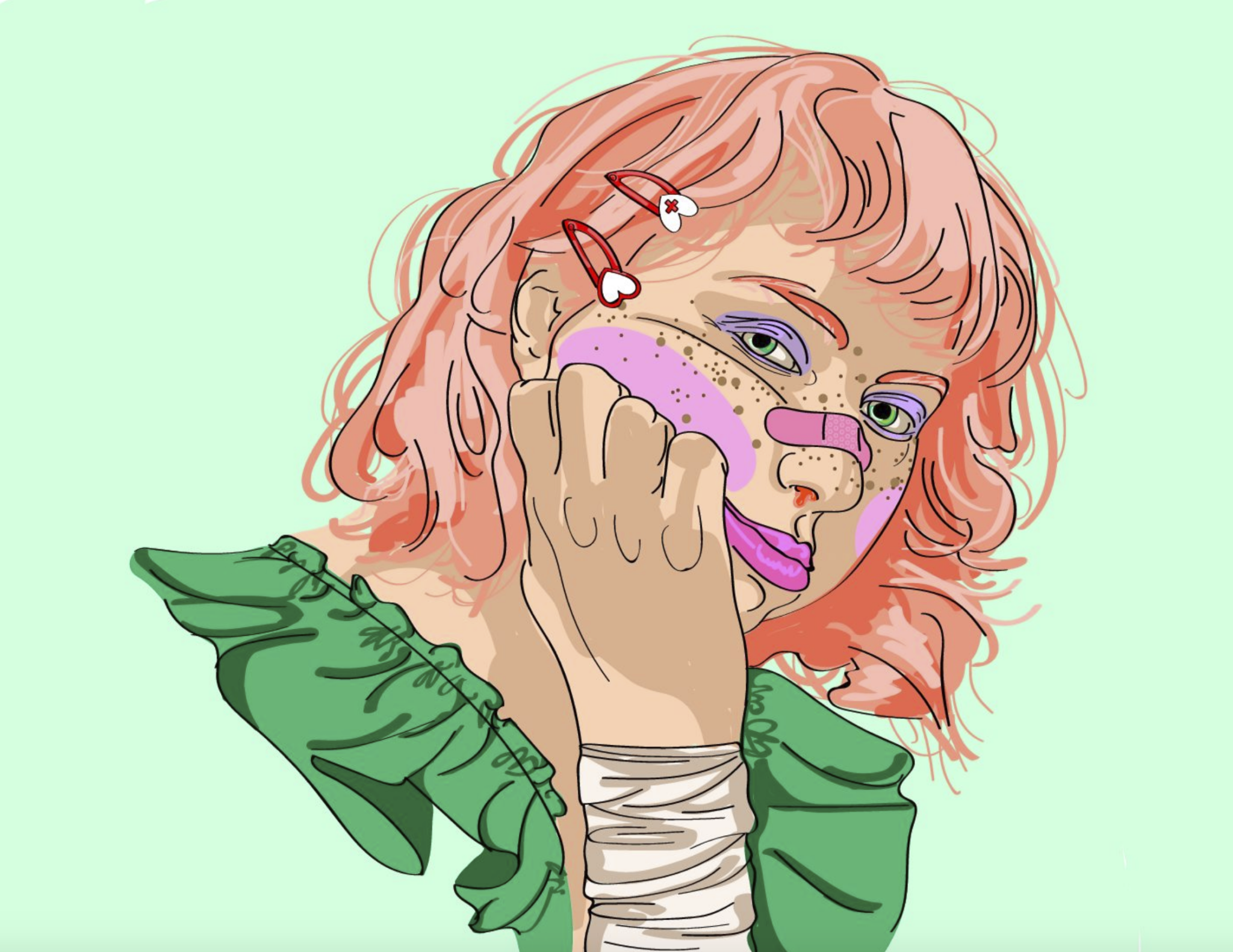 Since its recent emergence over the past few years, the Yami-Kawaii style has gained attention from industry publicists such as The Business of Fashion and Refinery29 as part of Japan’s cast of subcultures sprung from the 1970s. This fashion subculture in kawaii fashion, conveys an overwhelmingly cute appeal fit with pinks, pastels and, of course, sidekick characters fit to match.

When combined with the Menhara style, alluding to people who suffer from mental illness or are associated with cynical cyber groups, Yami-Kawaii fashion produces an overtly controversial “sick-cute” aesthetic. In fact, many critique the subculture, as the pastel ‘OUCH!’ bandages, merchandise, syringe and pill capsule accessories hold to the glamorization of mental health, self-harm, and suicide. However, with the majority of this critique being spoken through a western lens, it prompts the purpose this fashion subculture is capable of serving in its origin society Japan; one which reveres conformity and perfectionism.

The Refinery29 docu-style video was able to capture a more transparent, comprehensive vision of the Yami-Kawaii aesthetic through interviews with industry influentials. The dialogues produced consistently revealed the aesthetic to be a facilitator of a shift in the perception of mental illness by the broader Japanese society. For a culture in which rigidity and conformity hold influence over social customs and dress alike, street style which defies social norms can be highly empowering for individuals.

Effectively, Yami-Kawaii acts as a coping mechanism for complex emotions which are commonly viewed as weaknesses or poor character traits; as with any culture, the Yami-Kawaii clothes are being utilized for self-expression and self-identification in an almost therapeutic sense. One of the interviewees states that he loves the duality of having a “sick” element intertwined with “cute”, as these are commonly avoided. Embodying the Yami Kawaii sensibility, rather than using it solely as an adjective, is what differs Japan from the western culture, therefore making it an accessible medium for healing with others, and welcoming help and love.

An article written for The Business of Fashion took a more critical approach to understanding the cause and effect of the Yami-Kawaii subculture. Attributing much of the controversy to the traumatic events experienced by Japan during the calamity of the tsunami, nuclear reactor meltdown, and earthquake of 2011, the article contemplated the sensitivity of the aesthetic to the rarely discussed, yet notably high suicide rates of the country; Japan’s suicide rates are three times higher than England.

Though some individuals reach out through this form of dress, as made conclusive by both platforms, the article critiques the widespread use of the aesthetic as many of its wearers do not suffer from mental illness or other psychological trauma; rather, those producing merchandise benefit from capitalizing on its popularity. Regardless, the subculture remains subjective to the conformity of Japanese culture, and is therefore somewhat underground, save for outlets which facilitate a certain degree of anonymity to the public gaze and continue to allow for interest in the aesthetic as well as the ideas which it expresses.

The Yami-Kawaii subculture demands a degree of consideration for the ways in which we, as a western society, may perpetuate the same degree of normalization or inadvertent popularization of mental illness as an aesthetic to be bought and sold. Consider Ashley Williams’ transparent “anxiety” hair clips; sold out at the listing price of $215 CAD on ssence.com. Included as a part of a larger series with some clips proclaiming “ugly” or “paranoia”, the accessories can be analyzed under a similar perspective as those of Yami-Kawaii; they have been utilized and can be critiqued at a near parallel. When Selena Gomez sported her own set of “ugly” clips, she wore them to confront criticism from “haters” and as an acknowledgment to open a conversation with her fans. This clearly employs the same basic conventions of the Yami-Kawaii aesthetic within a western context.

Overall, the Yami-Kawaii subculture can be seen as a testament to the use of narratives within fashion. As the users of the subculture’s material commit to an embodiment of the aesthetic’s merits, they also commit to the continued conversation of personal and communal struggle, strength and communal support.