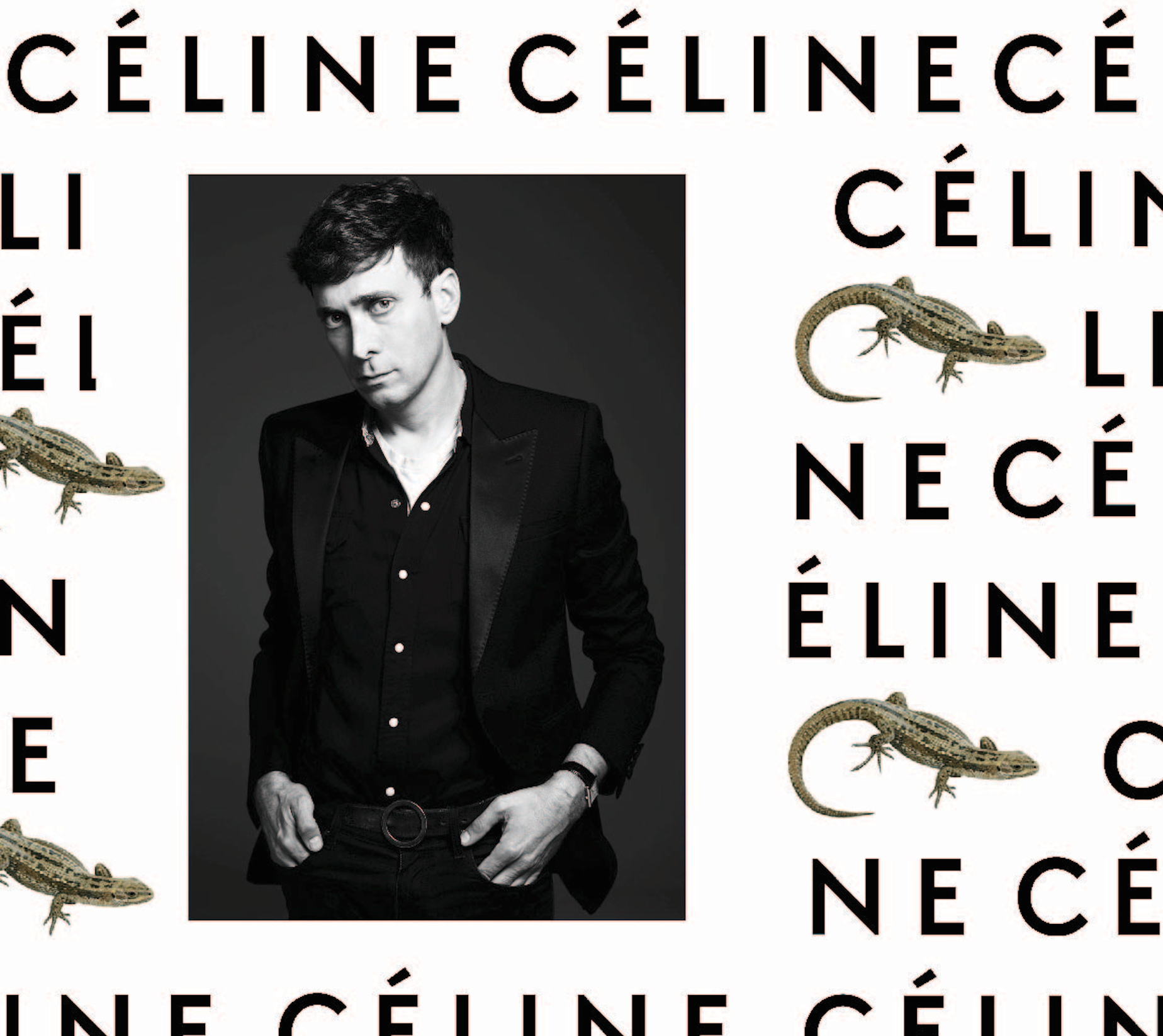 We Need to Talk About Celine.

Who would have guessed World War III would be hitting the world so soon, and in the world of fashion at that?

C(no accent)eline, debuted its SS19 collection at Paris Fashion Week last Friday. Following a series of glorious shows from French fashion empires Yves Saint Laurent and Dior, as well as from crowd pleasing labels Jacquemus and Off-White, none could match the hype that was surrounding the highly anticipated Celine show. And the reason for this excitement? This was Hedi Slimane’s daring exposé as creative director for Celine of which (following a recent controversial logo transformation) the world was watching through the most critical pair of Céline sunglasses.

Taking us back in time to a cold, gloomy, September 2nd day, Céline, under Hedi’s direction, announced something so unfathomable, so outrageous, and so frustrating that uproar has been going on ever since. Hedi Slimane changed the Céline logo, much like he transformed the YSL logo, but this time not through typeface. Instead, the logo underwent the most trivial alteration that, for any other word may have gone unnoticed, but for devotees of the brand, had a tremendous impact.

Through simply an Instagram post, on this cold, gloomy, September 2nd day, the iconic French brand was stripped of that little mark of French patriotism. As superficial and, arguably, linguistically unnecessary as it might have been, the accent was tributary to the French identity of the company and ties it back to its history. The Instagram announcement is stressful to look at, screaming at us with an all caps caption, and somewhat crass,  as it aggressively bulldozes over everything we’ve ever adored about Céline and Phoebe Philo’s legacy. And signing off the post is nothing else but a newly coined hashtag by the culprit himself: #CelineByHedi.

But it didn’t stop there. Perhaps the world would recover in due time if it had.

Slimane and his army proceeded to delete all existing content on the Céline Instagram page, in a purging cleanse of anything pre-Slimane. This suggests Céline (sorry I mean…Celine) is now starting again on a blank slate, and with subtle hints such as referring to the reborn brand as Celine 01, it’s clear that this is an exaggerated statement made by a huge ego trying to prove a point as he steps into Phoebe size shoes that are just too big for him.

Yawn, Seen it Before

Then we had the Celine show. Models clad in lots of leather, edgy and predominantly black outfits, resembling lifeless groupies walking down the runway. With obvious influences of 80’s grunge, each design oozing with the signature details of Slimane’s own style. Dresses were skimpy and tight, short, skin was showing, and overall, the looks were contrived and overly sexed. The menswear, which Slimane is tasked with for bringing to life, was nothing we haven’t seen before, with handfuls of skinny tailored suits that are often associated with Slimane. Each model wore black pillbox hats and fascinators and with so much of the colour black present (note: we’re speaking strictly of the clothing because it wasn’t until the end that a model of colour even made the stage), could this perhaps have been Slimane  giving old Céline and her accent aigu a funeral?

The controversy around the show was explosive. Some of the complaints were that the collection is wildly narcissistic. The work put on the runway was not assimilated with the identity that’s been sculpted to be Céline, but rather, the identity of Hedi Slimane, who put arguably similar garments on the catwalk during his time at Yves Saint Laurent. Many Céline loyalists even refuse to give him the satisfaction of calling the brand anything but Saint Laurent 2.0. And equally so, during his time as creative director for Dior Homme, the brand morphed into what Slimane attributed to his own taste – skin tight, tailored, straight suits and lines. So it seems to be a trend here, for luxury conglomerate company LVMH at the helm of these companies, to hire Slimane, only for him to put his own personal style ahead of the story already set up by each brand.

Defenders of Slimane might argue that, while he’s been performing these notoriously wild maneuvers of logo changes and rebranding at each of the companies he’s worked for, there is a lucrative appeal that hiring Slimane has. This new collection is targeting a younger demographic and opening the door for menswear fashion, as well as the appeal of the tailored suit. Despite going against Philo’s philosophy of remaining within their celebrated effeminate niche, from a financial perspective, the opportunities for new commercial markets will help the company profit and triple their sales, as LVMH hopes. Slimane has notoriety for bringing a commercial appeal to brands and raking in the dough, but all the same, isn’t each brand’s unique identity something we cherish when differentiating luxury goods? It’s not to say that Hedi Slimane’s personal style is something bad, but when he forces it upon us using the labels that we know and love as his channel, we can’t help but go sour when we see it. If he’s such an expressive creative, who absolutely needs his work to be seen, maybe he should start his own label, instead of seeping into the already established personas and coming off as a narcissist.

However, we can identify that another reason why the Céline show triggers a pain point is its case of bad timing. Merely the day before, the world was tuning in to the hearing of Dr. Christine Blasey Ford’s sexual assault allegations against Judge Brett Cavanaugh. Women across the globe were hurting on behalf of this woman who shared her devastating story, while being deeply opposed by Cavanaugh and his supporting Republicans. The argument at hand was more than one that was political – it demonstrated plain and simply the roles of men in power and the women who, the moment they started using their voices, became silenced.

This takes us back to the identity of Philo’s Céline, pre-Slimane, and for most of us, the one and only. The clean lines, minimalism, and soft tones sculpted Céline into the brand that every woman had dreamed of. Her design philosophy, “casting aside the male gaze to create clothes that make women feel like the most empowered kind of superhero“, established Céline as a wonderfully feminist label that emphasized the modern working woman. In so many instances of fashion design, we’ve had men making stylistic decisions and leading companies, targeting women as primary consumers and telling them what they want to wear through the viewpoint of what they want to see. Phoebe Philo revolutionized this male dominated trend, bringing in powerful women figures for campaigns, such as French dancer Marie-Agnes Gillot, iconic writer and intellect, Joan Didion, and her favourite muse, Daria Werbowy.  So, it’s been quite disheartening for women to have this brand that’s been so close to their hearts endure this regression. Slimane’s designs are over-sexualized and Céline has never been about that or anything remotely close to suggesting that a woman should be defined by her sexuality.

Fundamentally, if Hedi Slimane had quietly slipped into the position, made a smooth transition, and continued the feminine dialogue that was so tightly associated with the brand, maybe there wouldn’t be such a backlash coming at him from every corner of the internet. His frantic reaction upon taking the reigns and fervently erasing what was there before him was childish and immature, like a little boy who bullies others because he himself is insecure. It’s the obnoxious and boisterous arrogance that he’s come in with that is insulting to the women who can only see him as a power hungry dude stomping over the creative genius of a truly talented woman in fashion, thus unraveling all of the progress made in the barely-there feminist fashion scene.

What Will We Do?

Well Philophiles, one good thing that might have come out of all of this is the new Instagram account @oldceline, reminding us of the global village on the internet sometimes being an incredibly comforting place. I for one took great pleasure in finding other people who felt just as enraged as myself. Some people thought I was losing my mind over an accent, but oh no, it’s much more than that.  I’ve unfollowed new Celine and have now followed old Céline and, call me petty but Hedi started it.