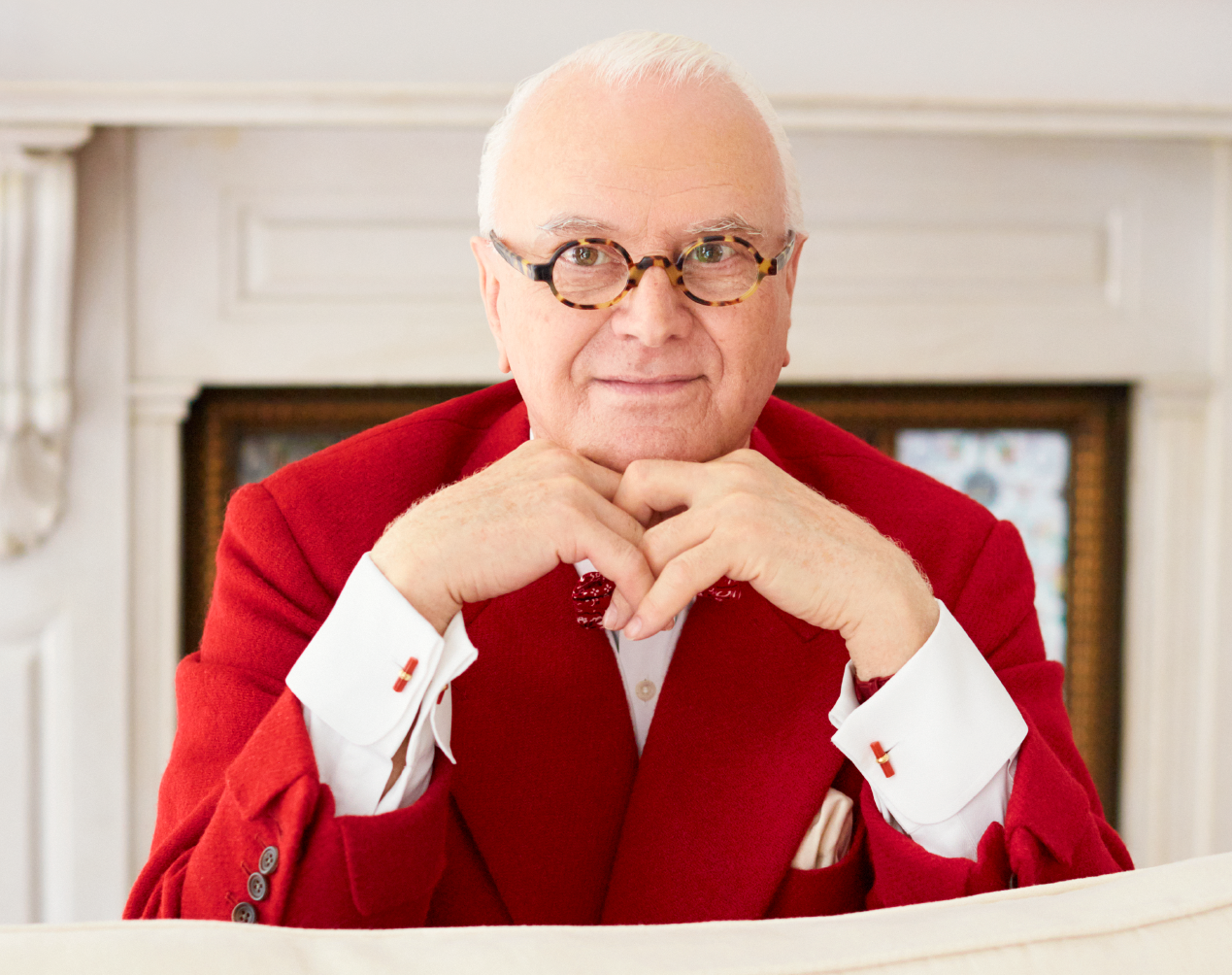 The “Manolo Blahnik: Art of Shoes” Exhibition in Toronto is a Big Deal

Manolo Blahnik’s “The Art of Shoes” is the biggest retrospective the Bata Shoe Museum, in Toronto, has ever hosted. It is the first exhibit to be on display without legendary Bata matriarch Sonja Bata at the museum’s helm. It is also the last and only North American museum to host the legendary collection of the designer and artist’s work; amassed over 45 years in the shoe industry. So why is it that the renowned footwear artisan chose Toronto of all places to showcase his life’s creations?

Bata Museum Collaboration is “an Act of Fate”

According to Mr. Blahnik, working with the Bata Shoe Museum on this exhibition was an act of fate. “[Working with] Mrs. Bata, someone I really wanted to meet, it was fate. I am very proud to be in this temple of beauty, which is beauty of the shoes, that I have not seen anywhere else in the world. Such a collection like this, of so many Native and European designs, doesn’t exist actually anywhere else. I have travelled to many many museums and the collection here is incomparable. And so I am very very very happy and humbled to be here to share this collection with all of you.” Mr. Blahnik shared this anecdote with us yesterday at the unveiling of “The Art of Shoes” a retrospective exhibition chronicling the 45 years that the artisan has been in the shoe business. To illustrate the expansive innovations Blahnik has achieved over his career, working with the likes of Diana Vreeland, Sophia Coppola, Ossie Clark and many others, the artist carefully selected 200 shoes, accompanied by 80 original sketches. The collection was constructed in collaboration with the exhibit’s guest curator Dr. Cristina Carrillo de Albornoz, who helped Mr. Blahnik select the works that would most “seamlessly reflect his personal journey, inspirations and achievements, collected over four decades”.

More than a Designer

As one walks through the exhibit, glancing from sketch to shoe, it becomes immediately apparent that Mr. Blahnik is so much more than a designer. He is, in purest form, an artist. His inspirations – which helped break down the exhibit’s sections – span from architecture, art, botany, literature, cinema, countries around the world, and key individuals in his life; all of which shapes everything he creates. All of these, similar to what modern day artist’s draw inspiration from signals to an individual who is so much more concerned with creating a work of art, an object that tells a story, than a commercial work to sit on a shelf. Artistry and attention to detail make up ever aspect of Manolo Blahnik’s creative process. From his sketches that double as works of art themselves, to the prototypes that reflect a carpenters hand, to the final object, a gloriously adorned accoutrement to the foot that often times is so beautiful you don’t even want to wear it. But the beauty of a Manolo Blahnik shoe is that you do want to wear it. The craftsmen who make up his three Spanish metiers, know how to make a damn comfortable shoe, thus adding an additional layer of artistic innovation to every work.

Many times, those that refute fashion objects’ ability to be art found their arguments on utilitarianism. “How can something be art if you are wearing it?” “Something you use in your daily life cannot be art.” But the thing is, and Mr. Blahnik knows this, is that it can. And it does. If we are to look at the origins of art history – bear with me a moment – many of the first “art practices” were actually founded on trades – work that required an immense amount of skill, training and handiwork. Metal-smiths who, previously made weapons and horseshoes, began sculpting objects with leftover materials were revered in their communities for their creativity and ability to transform a functional material into something beautiful. Sculptors were admired for their use of their hands to form essentially dirt and water into covetable artefacts that symbolized wealth and provenance. Painters were revered for their ability to put paint to canvas, making something out of nothing. In the early 17th and 18th centuries, those with a skill for making, were considered part of the upper class, with their unique skills constantly patronned by Royal families and religious heads of state.

The Art of Shoes

So if we are to apply the same logic for defining painting or sculpting as an art form, to the creation of shoes, the transition happens quite seamlessly. (Pun intended). The craftspeople who make up Manolo Blahnik’s three factories in Spain draw, cut, and mould leather, satin, silk, and other materials around a wood model for each size and shoe type. They sew and stitch disparate pieces of cloth, beads, thread, flowers, gemstones, one by one, all by hand, to achieve a real life replica of Mr. Blahnik’s watercolour sketches. If we are to apply the criterion for an artist to the craftsman himself, we see the transition also occur easily. Mr. Blahnik looks to all the same sources for inspiration as his fellow artists. He transitions his ideas to paper through watercolour painting and charcoal sketching (an art form in and of itself). He moulds leather and fabric by hand, inspecting every stitch to ensure each shoe is as perfect as the last.

All of this is to say that seeing “The Art of Shoes” at the Bata Shoe Museum between May 16th, 2018 and January 6th, 2019 is not just seeing the products of a famous designer. In true Bata style, it is walking down the road of art history. It is following the life and work of a master craftsman, an artistic visionary, and a creative genius rivalled by very few. This is also to say that Toronto is not just the quirky land of the North.

In the last number of months various fashion events happening throughout the city indicate that the global fashion community is becoming more and more aware of the amazing opportunities that lie within Canada. Holt Renfrew is currently leading the establishment of Toronto as the “next great North American fashion destination” as they were the exclusive Canadian retail partner for the Off White x Jimmy Choo shoe collaboration. Holt Renfrew also recently hosted supermodel-turned-philanthropist Doutzen Kroes at the Art Gallery of Ontario to celebrate the fundraising campaign she is championing “Knot on My Planet” which is a t-shirt collaboration with Canadian brand KOTN to raise funds for Elephant Crisis Fund’s Save the Elephants campaign. Guests to the OW x JC launch in collaboration with Holts was supermodel Lily Aldridge; Doutzen Kroes, Jordan Barrett, Constance Jablonski, Dilone, and Winnie Harlow (many notable fashion names) were in attendance at the 130-person Knot on My Planet gala.

Coupled with the recent international fame of many Canadian designers thanks to Royal-to-be Meghan Markle, international fashion celebrities are starting to put Toronto/Canada on the map. And the rest of the fashion world is taking notice. It seems then that the Manolo Blahnik exhibit in Toronto is keeping the Toronto-focused fashion momentum alive, signalling that we are not only a hotbed for fashion appreciation and luxury spending, but are a hand selected, perfect fit, for a fashion master’s life work.

We are also redefining fashion, as art. Thank you, Manolo Blahnik, for allowing us to champion the art of shoes.

“Manolo Blahnik: Art of Shoes” is on display at the Bata Shoe Museum (327 Bloor Street West, Toronto ON) starting May 16th, 2018 until January 6th, 2019. During these months the Bata Shoe Museum will be offering complementary programming titled Exclusively Manolo, a series of rich programming celebrating the exhibition, including exclusive tours, workshops, talks, and a film series.

Tickets to the exhibition, and more information about Exclusively Manolo programming at www.batashoemuseum.ca or by calling the museum at 416-979-7799.