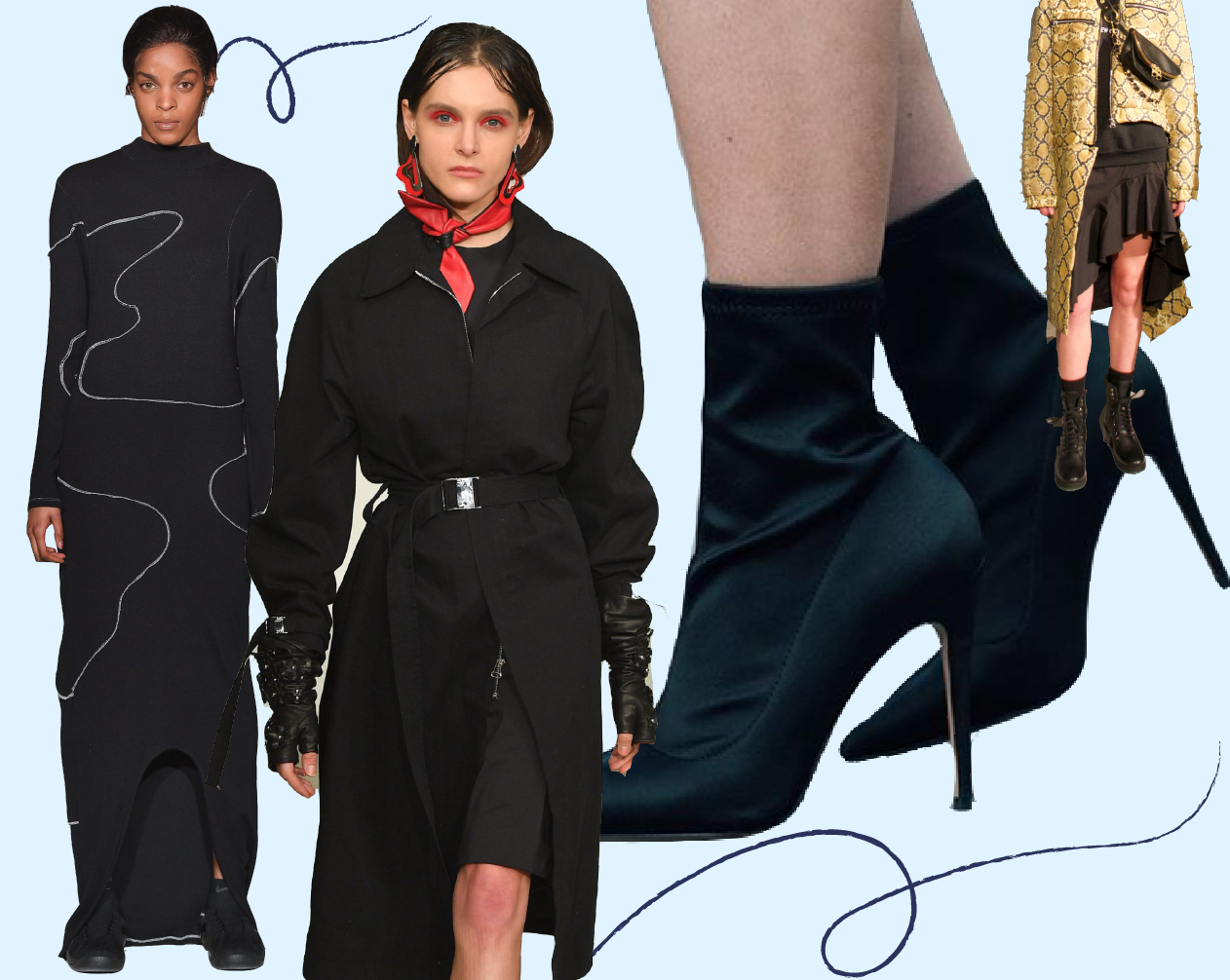 Last season StyleCircle published a fairly critical piece about the fashion industry in Canada/Toronto. If you don’t remember, or happened to miss it, catch yourself up here. Over the last few years, and most notably after IMG bailed on producing Fashion Week, the fashion industry here has been in a state of flux as it chafes at potential growth while struggling to find its identity. And it’s easy to see why.

Designers hailing from Toronto (because let’s face it the only ~real~ fashion industry in Canada (for now) exists here) make up two camps – (1) young, ambitious creative designers who are adamant on presenting the global fashion ecosystem with fresh ideas, but who struggle to get the international recognition they deserve, and (2) wealthy people with slightly less talent, but who are capable of garnering international attention because their names and money can buy it. As wonderful as the recognition is that these in the second camp are mustering, they aren’t designing and presenting collections that should be leading Canada into the international market. It is the group in the former camp who are actually going to push us forward if we want any hope of becoming NYFW or LFW calibre. What’s even more interesting is that some of our designers have already made it there. Erdem (who now shows in London), Beaufille, Greta Constantine, Tanya Taylor and Hayley Elsaesser for example have all shown and continue to show abroad (with the exception of Elsaesser who returned to TFW this year) instead of in Canada where they began. So why does our local industry continue to struggle?

Last season Toronto Fashion Week (orchestrated by Freed Developments and hosted in Yorkville) squared off against indie-up-and-comer RE/SET 002 (ran by The Collections and hosted on Queen Street West – Vogue’s coolest place in Canada). This separation of events – both literally and metaphorically – made the divide between the industry’s designers oh so obvious, and to be honest, RE/SET 002 won the showdown. Their line up of emerging and established designers demonstrated the true potential that Canadian creators have to offer. Toronto Fashion Week on the other hand, while glitzy and effective at showing that Canadian consumers have no shortage of money, was more of a party for the city’s elite than about promoting the designers. All in all the new TFW presented itself as a narcissistic and self-indulgent A-lister party (hello WHY was Russel Peters DJing?!!) than a platform to showcase Canadian design talent. And everyone could tell.

But this season, the discombobulation seemed a lot less chaotic. For Fall Winter 2018, the two organizations teamed up to present a unified front. We saw old faithfuls from both TFW and RE/SET 002 like UNTTLD, Narces, Hayley Elsaesser, Tara Rivas, Triarchy and WRKDEPT. But there were also some very welcome new injections like Adam Coimbra x UnCuffed, S.P.Badu and WIL Studios whose collections single-handedly stole the show. During the three days of presentations, we saw lots of runway shoes and stationary presentations, we talked to designers and eaves-dropped on the conversations of well-dressed guests. So, what did the newly-minted collaboration teach us this season?

If one thing is clear (see here and here) for the Fall Winter 2018 season it’s that streetwear is supreme and true inspiration comes from the streets. Andrew Coimbra, WIL Studios and S.P.Badu all showed collections that spoke to streetwear, street culture and the everyday experiences they have on the streets of their neighbourhoods. Coimbra’s investigation of streetstyle was meant to “push the idea of wearability and transcending street style but in a way that felt refreshing and not forced” (Coimbra, 2018). Well we can confirm: this collection was both refreshing and not forced.

Rahul Madan and Eric Richards of WIL Studios also played with re-interpreted streetwear this season. An acronym for “What I Like” the Toronto-based brand channeled dystopia in their FW18 presentation and made a point to demonstrate that streetwear can be worn by any culture. A branded turban was featured on one model while another wore a boiler suit made out of baby blue latex. The smokey atmosphere in the presentation space drove home the concept of a dystopian after-life, and boy are we down for it if this is what we get to wear.

The third, and probably most notable proponent of streetwear this season was Spencer Badu of S.P.Badu. Spencer’s collection not only looked good on the cast of all black models (yyaasss!) but also looked amazing on the rack as we chatted with him in the designer showroom. The collection titled “Mother” was an homage to all the powerful women in his life and how their power and agency could be translated into a streetwear context. All in all it’s no surprise that Toronto’s designers would be able to master streetwear so poignantly given that the majority of people we see on the streets of downtown are head to toe in Supreme, Off White and Yeezy. But to have streetwear designers who interpret the genre in a way that doesn’t scream “rich ass fuck boy” is a hurricane of fresh air that we hope is here to stay.

This season we decided to play our interview game a little differently. Instead of asking designers long winded questions that could be turned into full fledged annotated interviews, we decided to ask them the real hard questions that are constantly on our minds. Some of them being: “Why is it so effing hard to succeed as a designer in Canada?” and “what keeps you here hustling it out?” The responses we got were, to be honest, shockingly real. In an industry where putting on the heir of perfection is the number one rule in…well….everything….the fact that many designers jumped at the opportunity to share their real honest thoughts was really refreshing. Olga Barsky, former stylist and designer behind UnCuffed Leather, shared with us that designers here “need more funding, more mentorship programs, and more help from the banks. We need the banks to actually sit down with designers and help them craft business plans.” (Barsky, 2018) This revelation was not a surprise to any of us fashion students as we already know how expensive it is to get a collection off the ground. But to have someone successful in the industry to say there isn’t enough financial support for designers, was something we didn’t think we would hear, but are so glad we did because now we know what needs fixing.

Andrew Coimbra (who collaborated with Barsky this season) echoed that notion of business support and added that a large reason why Canadian designers aren’t known is because the big retailers (think HBC, Holt Renfrew*) here don’t support them. “Everyone always says that Canadians don’t buy Canadian, or don’t buy who they don’t know, but I think a big part of it is that we don’t have the access to them” (Coimbra, 2018). According to Coimbra, Canadians would probable eat up the Canadian labels because of their edge, their quality and their bespoke design. But without the support of the big retailers, it’s very hard to expose people to new and emerging brands. Major retailers need to start making space for Canadian producers, and the excuse that we ‘aren’t as big as Gucci’ just doesn’t cut it anymore, because some of our home-grown labels like Sid Neigum and Beaufille (who are both sold via Net a Porter) score the same clientele that shop at Victoria Beckham, Celine and Isabel Marant. So there’s no reason why the brands like Coimbra, who operate on that same level of quality and craftsmanship, shouldn’t be on display at HBC and Holt Renfrew.

Many designers did in fact reference the lack of exposure to international media as another major problem, but they all agreed that if the ecosystem here was more supportive of Canadian design talent and more funding was available, gaining the international recognition on their own merit wouldn’t be as difficult.

Fashion Needs to be Recognized as Art

In our interview Olga Barsky went on to explain that in addition to a lack of funding, there is a lack of national recognition of Canada’s fashion design talent. The government, whether municipally, provincially or federally, has never recognized fashion as a key market of artistic production. Current legislation lamely places it under the category of “design”, which lumps it in with architecture and graphic design. Because of this lack of serious recognition, there has never been funding set aside specifically for fashion designers. As creators who use visual, emotional, physical, psychological and experiential influences in creating their collections and garments (in the same way visual artists do) it is hard to understand why this inclusion under “art” has never happened. Barsky and Elsaesser were the only two designers we interviewed who frankly called out the government and the fashion industry itself for not adequately supporting its emerging talent. Despite that they were the only two to talk so openly, we imagine many of the other designers who weren’t so curt would agree behind closed doors.

Despite all the criticism of the industry here, there was one common thread among all designer comments. We spoke to Narces designer Nikki Wirthensohn Yassemi, Tara Rivas, Andrew Coimbra, Rahul Madan and Eric Richards, Olga Barsky and Hayley Elsaesser and all of them had many positive things to say about the Canadian industry. They cited the smallness of the industry as being very supportive and collaborative and Barsky summed it up beautifully when she said “maybe we’re a little bit smaller, but I think we’re a little bit nicer too” when comparing Toronto to New York. Hayley Elsaesser (who’s shown collections in New York and returned to Canada) said that Canadian fashion week producers are a lot more supportive of designer’s ideas when it comes to how their collections are presented than the organizers of NYFW. For Nikki Wirthensohn Yassemi of Narces “Canada is home” and she has no interest in leaving to go elsewhere. The same sentiment was shared by Tara Rivas who loves her team in Canada and the people she gets to work with here.

So it’s not that Canadian designers want to leave – maybe some do, and that’s fine – but for the most part Canadian creatives want to do their creating here. Here is home, here is safe and here is ripe with possibility and opportunity. Although big and glamorous and established, many of the fashion capitals we idolize like New York, London and Paris are oversaturated. Everyone is going there because everything is already there and because of this the market is overflowing with creatives desperate to succeed at any cost. These cities are therefore that much harder to succeed in because of it. Toronto’s small and infantile size makes it that much more ripe for opportunity and growth. But in order for our designers to SUCCEED and grow here, a lot things need to change otherwise we will continue to lose our best and brightest to those cities that are still capable of supporting them despite their oversaturated nature.

How will you #WearCanadaProud in 2018? It’s our #NewYearsResolution to continue celebrating the outstanding achievements and emerging talent in the #CanadianFashion industry and grow a stronger appreciation of #Canadian talent both at home and abroad! #CAFA2018

All in all Fall Winter 2018 in Toronto was a hit and we are slowly seeing our industry pull itself back together post-IMG. The emerging indie designers of RE/SET are still winning 2-0 over TFW, but the fact that this season was so unified and collaborative gives us some serious hope for the future. Let’s just hope that next season the two organizations can find a venue you can actually find your way through.

*Note: Andrew Coimbra did not specifically name these retailers in our interview with him.