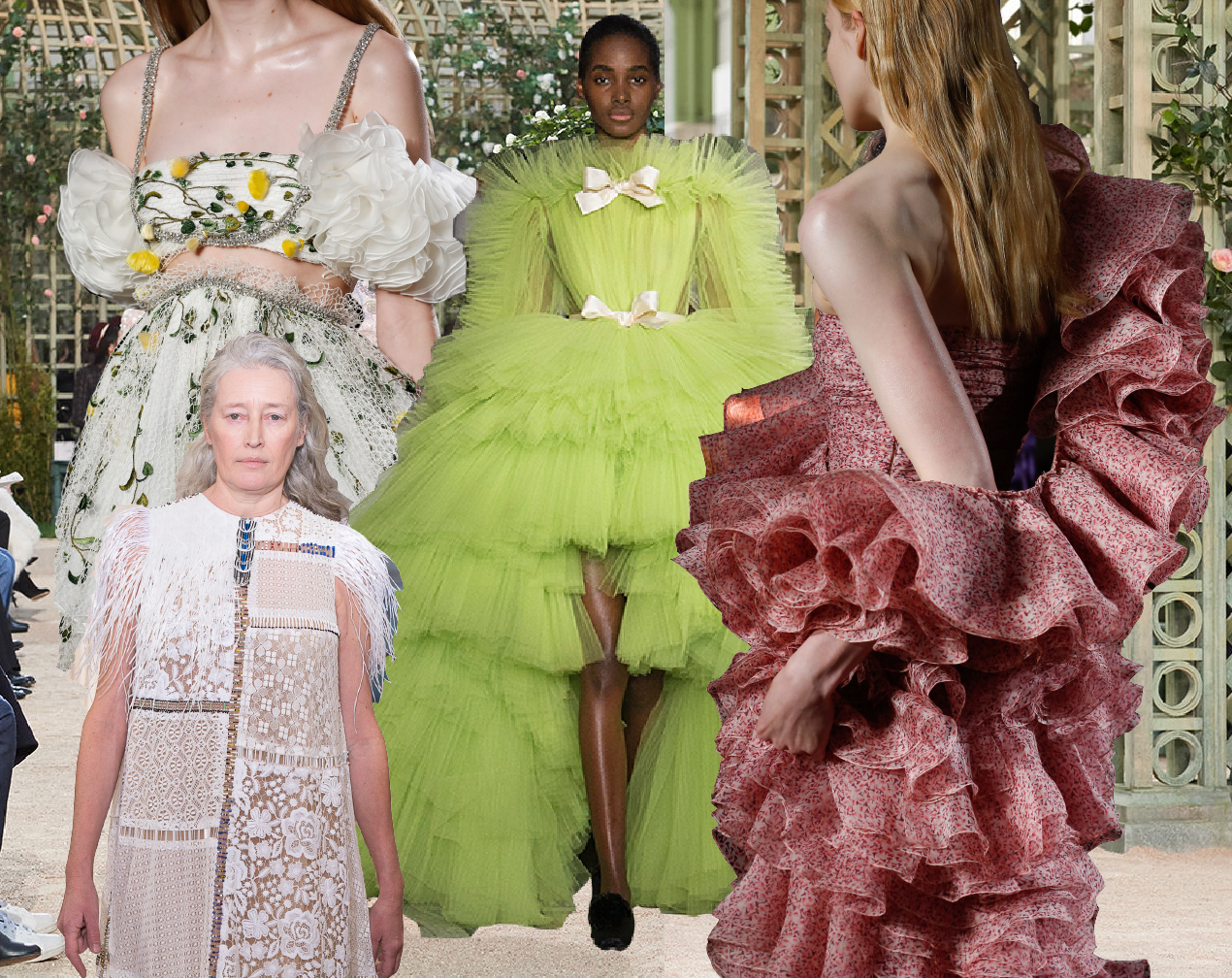 Out with the old, in with the… recycled? Normally I would be the first to attribute laziness or burnout to designers who present collections that feel recycled from the archives, when I know they typically produce ever-changing and always innovative designs. But the situation witnessed on the Paris Haute Couture runways this week demands a double take on one party in particular: us; the viewer and reviewer. The majority of the collections feel like compilations of pre-used motifs and silhouettes modified for modern times. But unlike seasons past, where repurposing signalled exhaustion, this time around the ode to couture house’s histories feels refreshed, rekindled and reinvigorated.  This return to the history books feels like an attempt to find guidance for the future, and in doing so, designers presented collections fit for a new day where the sun shines bright and optimism reigns. These are collections we are ~here~ for.

Now is where the inner monologue begins.

On the one hand, designers who show during Paris Fashion Week are part of an elite community who make up, arguably, the most recognized fashion week of each season. We turn to them in times of despair to provide a sense of wonder and fantasy when the bleakness of reality weighs us down.They are relied upon to drive fashion forward when others don’t. They are not relied upon, to stall it. But contrary to that notion, recycling previous work is: a) a way to build a concrete brand image, and b) iconic when what is being recycled is done in new and dynamic ways. The fashion industry seems to unanimously have no issue with the predictable recurrence of tweed suiting at Chanel and the permanence of Dior’s “New Look” silhouette. But to explain why recurrence at Dior and Chanel comforts as opposed to disappoints requires a bit of a history lesson, as these design features are not a sign of laziness, but of appreciating iconic innovation.

Haute Couture Chanel vs. The History of Chanel

Chanel began its reign as one of the most influential and identifiable brands in 1925 with two simple looks: the LBD and the collarless skirt-suit. Both garments, originally created as functional evening-wear that transitioned Parisian women from home to the workforce, are now being reinvigorated with modern artistry and embroidery that ironically makes them less functional in the “real world”. To wear one of these Chanel frocks to the office would garner you a lot of stares and would most likely hinder the progress of your workplace feminism.

This season, both iconic styles were resurrected in full force, with wonderful modifications. The 69-piece collection featured lace, silk and tiered LBDs covered in beads that fell farther down the leg than their predecessors. The lightweight appearances of the dresses kept them aesthetically aligned with the natural elements that made up the show’s set. Chanel’s classic tweed jacket took on an A-line shape that fell away from the body and featured faceted shoulders that gave volume without heaviness. These modifications coupled with modernized collar variations gave a feeling of surprise and novelty to the traditional suiting. The natural aesthetic of the show, executed via silk and tulle accents, was perfectly combined with Chanel’s classic use of strong embroidery and tweed.

So the question remains: can Chanel ever do wrong? And as always, the answer is no. Well maybe they could put more non-white models on the runway; but that’s another conversation.

Only in Pierpaolo Piccioli’s world would the brand be able to so perfectly incorporate their romantic and powerfully feminine past with the more relatable and casual style of modern day. This union, poignant in its timing, couldn’t have come at a better time given the political and social climate we are currently experiencing. Now, as women the world over continue the fight for equality, Valentino is here to arm them for battle. Valentino has always been for powerful women, providing the confidence needed to handle the everyday. But in looking to the brand’s past, we cannot forget that for a long time their look was unattainably glamourous.

With the myriad changes this season however, displayed Piccoli’s readiness to respond to what the women of his world need in this new era of empowerment. In pairing a voluminous, flowing yellow coat with a simple white tank and trousers, Valentino will build on its ability to empower by appealing to every powerful woman. Vogue’s Sarah Mower said it best: “Yes: If you’re a damn cool casual woman, you can come to the couture ball after all”. And what could be better than more cool women coming together, at a couture ball or you know, anywhere.

A Bevy of Imbued Inspiration at Dior

And finally, Dior’s Spring 2018 Couture collection paid surrealist homage to Christian Dior’s iconic New Look design that erupted after the War. Not only was homage paid to a time in history (i.e. WWII/postwar) when women’s contributions to society are marked as monumental (metaphorically poignant given the current social climate), but Chiuri chose to highlight and reinvigorate a time in Dior’s corporate history when the New Look equipped women to continue their powerful contributions in the working world. Creative Director Maria Grazia Chiuri continued by taking inspiration from female avant-garde artist Leonor Fini, whom Christian Dior assisted in exhibiting prior to becoming a fashion icon. All her inspirations were clear in this collection, subtly with the New Look silhouette featured in lighter fabrics but with altered necklines, and literally with the avant-garde patterns, face masks and makeup being the stars of the show. And on top of all of that goodness, Maria’s continued efforts to highlight and dress creative and courageous women makes this collection even better. The French feminist sayings transcribed on the chests of select models provided an even more welcome recurrence: Maria Grazia Chiuri’s activism.

Other Stunning Stars of PFW

Given how big Paris Haute Couture week is, it is hard to forget just how many heavy hitters call this segment of the fashion month calendar their home. After covering the likes of Dior and Chanel we sometimes forget that other major brands also dominate during this time. Givenchy for example, now helmed by Claire Waight Keller, blessed us all with simplistic chicness, and as much badass-ery a brand could ever muster and an audience could ever ask for. Her inaugural collection at the famed fashion house, demonstrated not only a shifting of the tide in terms of tailoring, but also hinted at future magic to come given the craftsmanship resources Waight Keller now has at her disposal in the Givenchy ateliers. Schiaparelli and Elie Saab brought the spring vibes, which in mid-January is a breath of fresh (not -20) air. Schiaparelli’s Grecian looks were a welcome departure from the other dark and monochromatic collections seen this week. In a time of upheaval, this was exactly the counterbalance we needed. Elie Saab did the same providing a more ethereal and romantic feel resembling the aesthetic of a 1950s remake of Game of Thrones. This inspiration source doesn’t seem to be waning from Design Director Burtrand Guyon’s playbook anytime soon, and it’s a reference we could never oppose anyways.

This spring couture week was nothing short of magical, giving us all of the inspiration we could ever ask for and throwing us back in the best way possible. On top of that, the collections were paradoxical, mixing inspirations from the past with a voice fit for the future. For the first time in what feels like a long time, many brands conveyed a palpable and opinionated voice about the issues facing women today. This season there was no side stepping issues or feigning political correctness, but a daringness to contemplate and a commitment to forge a better future. This future of equality is not only empowering for women, but it is one where we’re all very well dressed. Paris Haute Couture designers finally had a conversation about the world we currently face, and made it clear that this discussion – and fight – will continue taking place for seasons to come.