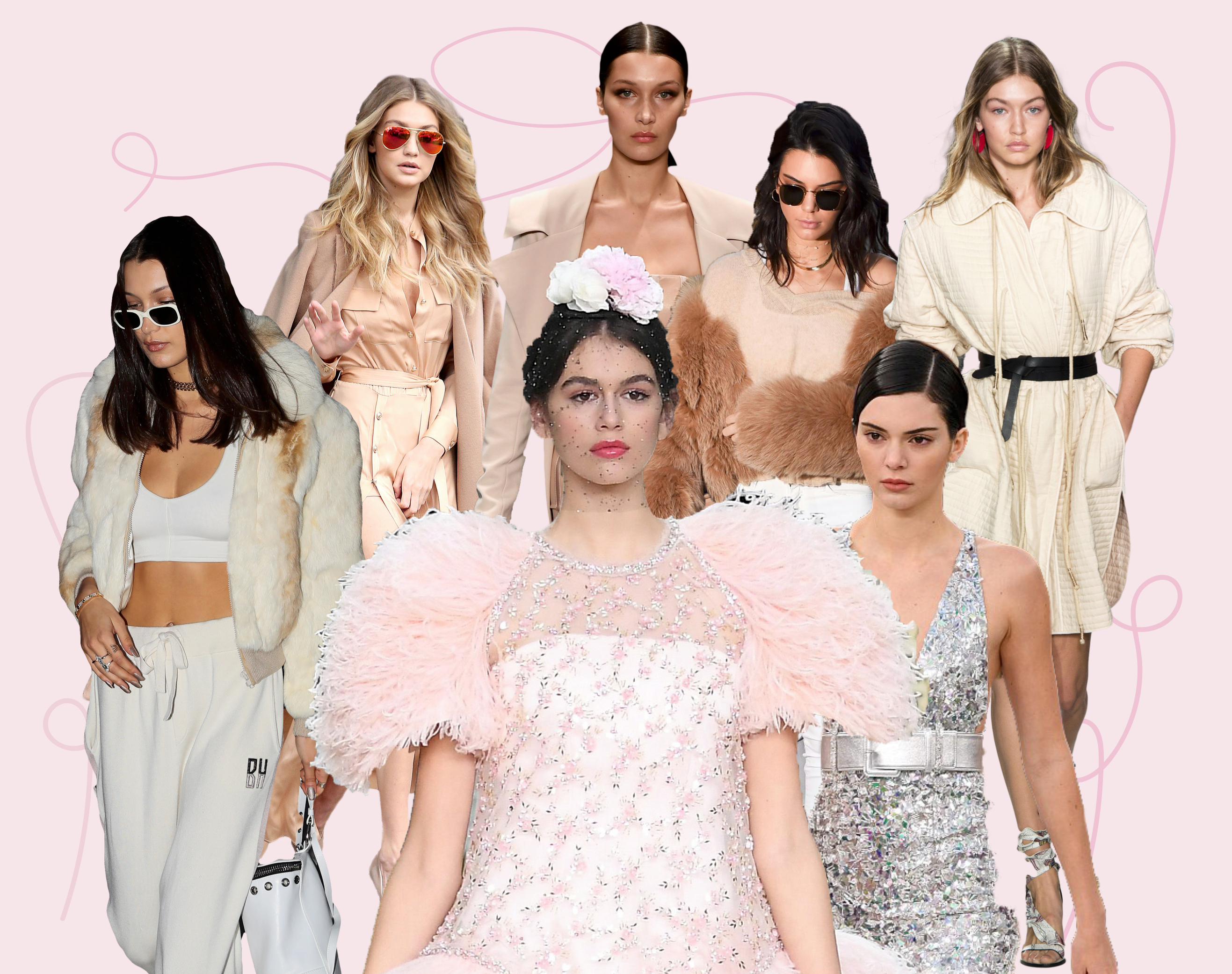 Does Being a Celebrity Fashion Child Make You a Supermodel?

Female models are a key influence in the fashion industry, they are today, they always have been. They are also a major artery to fashion promotion. We see them on the runway, the streets and, most importantly, all over social media. Over time, a model’s career has become only as good as her presence in the latter; her follower count fuelling her success in the industry. We’re all guilty of following our favourite models on social media because, at the end of the day, it’s not too hard to see that their lives are far more glamorous than our own. Who wouldn’t want to know about Taylor Hill’s snow dusted holiday trip to Colorado or Elsa Hosk’s sun induced vacation to Costa Rica. These internationally recognized models can easily be classed amongst the new age of supermodels. We’ve waved goodbye to the era of Naomi Campbell and Cindy Crawford to make room for a new age where the likes of Kendall Jenner and Gigi Hadid thrive.

What Does It Mean to be “Super”?

A model is deemed ‘super’ or a ‘supermodel’ due to their international following and reputation. Those models who stand out from the crowd have longevity in the industry because they posses unique qualities –  strong bone structure, off set eyes, dazzling features, or a uniquely smooth walk. This definition of ‘supermodel’ applied to the likes of Cindy Crawford and Claudia Schiffer among others during the 90s and it was their unique look and ability to transform in front of the camera that garnered them international acclaim.

In 2018 (and 2017 too for that matter) this definition doesn’t cross over so seamlessly to the new era of models cropping up. It’s true that models like Kendall Jenner and Gigi Hadid have a prominent global presence as we see them gracing the covers of international Vogue magazines and walking in some of the biggest runway shows during any given fashion week. However, for Kendall and Gigi, as well as Hailey Baldwin and Kaia Gerber, it isn’t necessarily their enviable personality or captivating presence on the runway that sets them a part form the rest but, seemingly their name and ‘who they are’. Having a tie to a celebrity family or well known name is a common theme amongst most of today’s ‘supermodels’. These models have been given a platform to succeed from the get go due to their preexisting celebrity status awarded at birth. Lionel Richie, Alec Baldwin and Yolanda Hadid have all paved the road for successful model offsprings Sofia Richie, Hailey Baldwin, Gigi, Anwar and Bella Hadid. Not to mention one of the most influential families of the current generation, the Kardashians, collectively paving the way for Kendall Jenner.

Stardom as a Birthright? Respect Not So Much

Celebrity children are prematurely deemed supermodels before they have officially accomplished a set of major career goals commonly tied with this title. Models of today are manufactured unlike the models of the past how grew into their industry status through hard work and ability to produce captivatingly unique images. The original supermodels of the 90s, otherwise referred to as the ‘Big Five’: Naomi Campbell, Cindy Crawford, Linda Evangelista, Christy Turlington and Tatjana Patitz (later replaced by Claudia Schiffer), were all scouted and organically rose to stardom. Same goes for Kate Moss when her never-before-seen look exploded onto the scene in the early 2000s, forcing the Big Five to expand to the Big Six. All these women had something unique and were scouted for it; not handed it for their riches and pre-existing fame. For instance, Naomi Campbell was discovered by an Elite agent while she was walking by London’s Covent Garden. During the 90s social media didn’t even exist and, evidently, would not have been used as a medium to gain a following and thus a global persona.

Followers vs. Features: The New Barometer of Success

In 2018, social media offers anyone a chance to earn fame and fortune and many supermodels rely on this platform for just that. For example, Romee Strijd has gone down the social media ‘influencer’ route as she frequently updates her Instagram with perfectly poised photos, and a Youtube channel with vlogs of her daily activities. The majority of supermodels today have significant followings on Instagram, such as Gigi Hadid with 37.9 million followers and Kendall Jenner clocking in at an astronomical 86 million followers. Models are becoming recognized not necessarily for their career accomplishments but their appearance in popular culture. Gigi Hadid is no stranger to the small screen as she has been featured in many music videos over the years including ex-One Directioner Zayn Malik’s ‘Pillowtalk’. Kendall Jenner has also had her fair share of time in the spotlight due to her family’s “reality” sitcom ‘Keeping Up With the Kardashians’.

There has been debate within the fashion industry whether Gigi Hadid and Kendall Jenner should even be considered supermodels. Many industry professionals in the past have spoken in favour as well as against the models in question. Former supermodels like Janice Dickinson and Stephanie Seymour have criticized both Kendall and Gigi alongside Robert Verdi, fashion commentator and stylist, who was quick to mention that “rich kids are in style”. Whilst there are industry professionals like Tyra Banks and Marc Jacobs supporting the models in question, the debate over what makes a ‘supermodel’ in 2018 is still a discussion point in the industry.

It became a prominent discussion for members of our team when just last season at the ripe age of 16, Kaia Gerber walked her very first fashion week show and hours after her toes first hit the catwalk, Vogue had deemed her a supermodel. Sorry but, sweet angel baby Kaia: no one gains that title after one runway show. After that, the topic of ‘what makes a model a supermodel’ was on the tip of many team member’s tongues and has subsequently been on the tongues of those working in the industry ever since. There comes a point where we must assess whether or not these young women, donning these expensive clothes and promoting them to their millions of followers, are actually worthy of our respect, or just our ‘likes’. Sure they are gorgeous and cause a stir outside every fashion week show, but do their images captivate us, does their look redefine what it means to be beautiful, and can they even walk? In Kendall Jenner’s case the answer to the latter is a hard “NO”.

So Where Do We Go from Here?

Social media has turned the definition of ‘supermodel’ on its head and the fashion industry is struggling to digest it. Celebrity children are being prematurely labelled as supermodels purely because of their internet fame and not because of their posing technique, their unique features or their walk. Social media has become a tool in which these models gain their popularity and industry relevance for things completely devoid of skill or expertise. So the real question: is can we really call this new generation of models ‘supermodels’ if there isn’t anything distinctly ‘super’ about them? Are the Kendall Jenners’ and Gigi Hadids’ of today positively impacting the fashion industry in a creative way or, are they just another cog in the promotional machine that allows brands to access millions of potential customers? Celebrity child destined to rule social media? Yes. Supermodel? Maybe not. Let us know what you think in the comments.